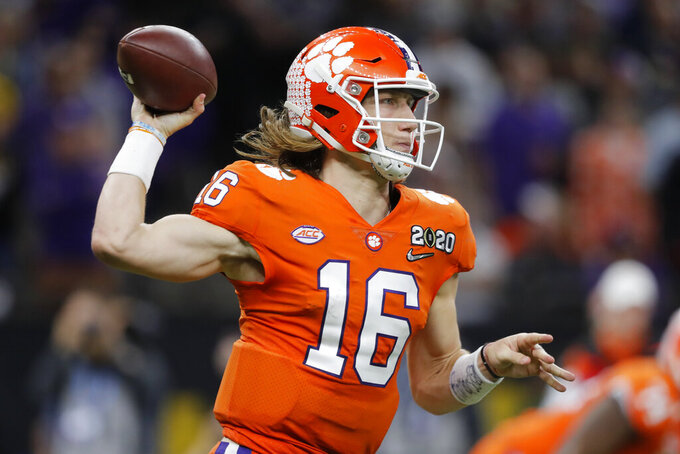 CLEMSON, S.C. (AP) — It turns out Trevor Lawrence and his girlfriend didn't do anything wrong when they were trying to help coronavirus victims and their families.

What sounded like a noble effort but might have been an NCAA violation is OK after all.

The NCAA said Tuesday the couple can resume their fundraising efforts after Clemson officials had shut down their gofundme.com page — “Covid-19 Family Relief and Support" — for fear the quarterback was committing a violation.

Lawrence and his girlfriend Marissa Mowry received the go-ahead from the governing body for the page after Clemson's compliance office had halted their efforts Monday afternoon — hours after they launched it.

The roller-coaster ride had left Lawrence — one of the leading Heisman Trophy candidates heading into next season — and Mowry, a soccer player at Anderson (South Carolina) University, apologizing for trying to do what they thought was right before the NCAA stepped in.

The NCAA said in a statement it did not ask Clemson to take down the gofundme.com page. The NCAA said it will continue working with its member schools to ensure athletes and those affected by the virus are supported.

“We applaud Trevor for his efforts,” the NCAA statement said.

Clemson spokesman Ross Taylor said school compliance officials correctly applied NCAA guidelines against athletes using their names, images and likenesses for crowdfunding — but that was before the NCAA contacted the school.

“We applaud and appreciate their swift action in permitting this activity,” Clemson's athletic department said in a statement.

The couple had raised $2,670 before Clemson officials informed Lawrence the the page violated NCAA rules. Before the NCAA contacted Clemson, Mowry had posted a video on Instagram Tuesday explaining the situation, thanking those who donated and apologizing for any confusion.

“Our intentions were to try and help everyone,” Mowry said. “That's changed a little bit, but we're still going to do our best to love on on y'all and support one another during this hard time.”

Taylor said he did not know if Lawrence and Mowry would restart their fundraising page.