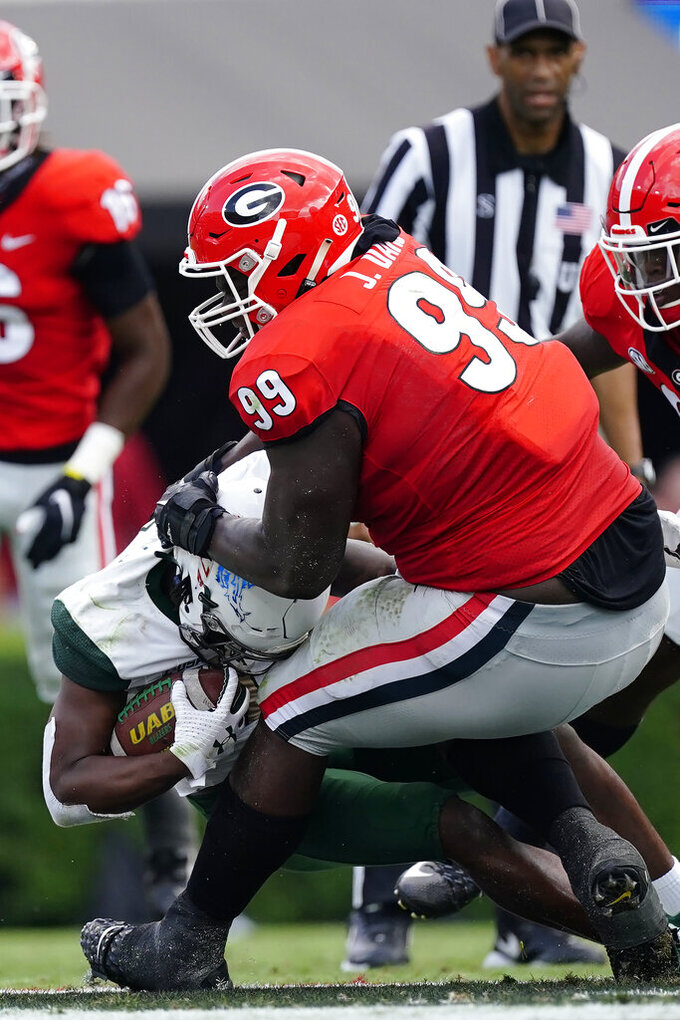 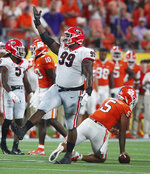 Jordan Davis has opened plenty of eyes as he leads the Georgia defense.

Clemson offensive coordinator Tony Elliott drew in a deep breath as he recalled how the 6-foot-6, 340-pound defensive tackle blunted the Tigers offense in Georgia's 10-3 victory on Sept. 5.

“I had to check my eyes,” Elliott said in wonder. “That is the largest human being I've ever seen.”

Davis, a senior, is certainly large. He's also quick, nimble, technically sound and expected to go in the early rounds of the NFL draft next spring.

Davis has eight tackles in four games this season, including three behind the line of scrimmage. His value, though, comes in occupying two or three offensive lineman to free up his teammates to get into the backfield. As Davis has said, “If there's two on me, somebody's free.”

Davis played only nine snaps in last week's 62-0 victory over Vanderbilt, mostly because he didn't need to with Georgia up 21-0 just five minutes into the game. His workload figures to increase as the Bulldogs face No. 8 Arkansas, No. 22 Auburn and No. 10 Florida in three of their next four games.

Davis would have likely been a mid-round NFL selection this past spring had he left. However, he wanted to return, in part to help his teammates chase a national championship.

Davis has excelled at showing his speed, as he's become an every-down defender capable of pressuring quarterbacks.

Davis has shown all of that this season.

Georgia lists Davis as 6-6 and 340. He has eight tackles, although his time has been limited because Georgia has taken large leads in the last three of its four wins. He has three tackles for loss and 1 ½ sacks. He has played in 36 games in four seasons, registering 6 ½ sacks and 36 tackles.

Davis' play against Clemson in the marquee season opener put the college football world on notice that he had improved his game and Georgia would be hard to score against. Still, Johnson is partial to how he ran down the UAB quarterback to make a tackle in Week Two, something he might not have been able to do in past seasons.

Jim Nagy, executive director for the Reese's Senior Bowl, is awed by Davis.

“Usually as a scout when you describe a guy as immovable, he himself can't move very well," Nagy said. “But this is an immovable guy who can also move.”

Nagy said Davis is good against double teams that allow linebackers to make plays. Davis also has the length to knock down passes and run laterally to make plays.

Scouts will be watching for Davis to continue his up-field movement and show he's a three-down lineman at the next level, like Derrick Brown of Carolina and Javon Kinlaw of San Francisco, according to Nagy.

Davis' strength and speed make him unique, and Nagy described his skill set this way: “I think they're kind of unicorns.”

“The more he can get in front of NFL teams, the better off he'll be,” said Nagy, who met Davis at SEC Media Days. “His personality and character will sell itself.”

He currently fits in as a likely late first-round or early second-round pick, although his stature seems to rise each week Georgia's defense keeps another opponent out of the end zone. Before the season, Pro Football Focus had Davis ranked as the country's second-best NFL draft prospect for the defensive interior behind only DeMarvin Leal of Texas A&M.