No. 1 Alabama, No. 3 Georgia seek national title in rematch 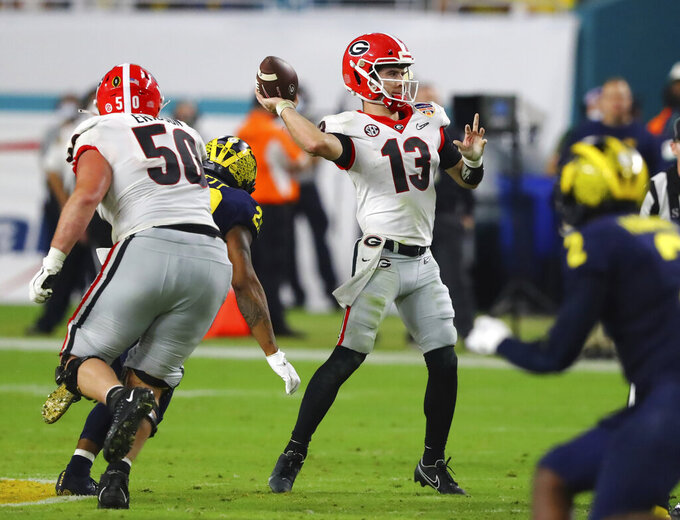 Georgia Bulldogs quarterback Stetson Bennett (13) throws a 39 yard touchdown pass to Georgia Bulldogs running back James Cook (4) in the 4th quarter of the 2021 College Football Playoff Semifinal between the Georgia Bulldogs and the Michigan Wolverines at the Orange Bowl at Hard Rock Stadium in Miami Gardens. (Curtis Compton/Atlanta Journal-Constitution via AP) 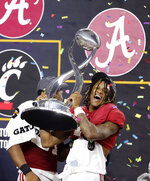 Line: Georgia by 2 1/2, according to FanDuel Sportsbook.

For Alabama, it would make the Crimson TIde the first team in the CFP era to earn back-to-back titles. The Crimson Tide last won consecutive titles in 2011-12. Under coach Nick Saban, Alabama has won six national championships in 14 years. Georgia, meanwhile, is trying to snap a seven-game losing streak against the Tide, win the school's first title in 41 years and swing the SEC's balance of power east.

Young was not sacked and the Crimson Tide finished with no turnovers against the Bulldogs. Georgia needs to corral the Heisman Trophy winner and still be stout enough to slow down an offense that ran for more than 300 yards in a semifinal victory against No. 4 Cincinnati in the Cotton Bowl.

Georgia: DT Jordan Davis and LB Nakobe Dean, the award-winning stars of the Bulldogs' dominant defense. Davis, the 340-pound Outland Trophy winner, is the leader of the Bulldogs' run stuffers. Dean, the Butkus Award winner, needs to replicate the stellar performance he had against Michigan in the Orange Bowl and get Georgia into the proper defensive alignments.

Alabama: WR Jameson Williams. The Ohio State transfer has been the ultimate game-breaker for Alabama. The junior averages 20 yards per catch with 15 touchdowns and he burned Georgia for 184 yards and two scores in the first meeting.

Georgia coach Kirby Smart is 0-4 against his former mentor, Saban. ... Saban is 25-1 all-time against former assistants, but the lone loss came in October against Texas A&M coach Jimbo Fisher. ... The Bulldogs have appeared in only one other CFP title game, losing to Alabama in overtime in January 2018. ... The Crimson Tide has won 34 consecutive games against SEC East Division foes, dating to an October 2010 loss at No. 19 South Carolina. ... Georgia allows 9.6 points, tops in the nation, while scoring 39.0 points (ninth nationally). ... Saban's 29 wins over top-five teams is an FBS record. ... Georgia QB Stetson Bennett IV ranks fourth nationally in passing efficiency at 176.8 and could break Aaron Murray's single-season school record (174.8 in 2012). ... TE Brock Bowers broke Georgia's school record for TD catches in a season (12) en route to earning SEC freshman of the year honors. ... Alabama OLB Will Anderson Jr. leads country in sacks (17 1/2) and tackles for loss (33 1/2). ... Monday marks the first time Alabama and Georgia will meet outside their respective states. The 2018 title game was played in Atlanta.