No. 1 LSU visits No. 2 Alabama in SEC West/playoff showdown 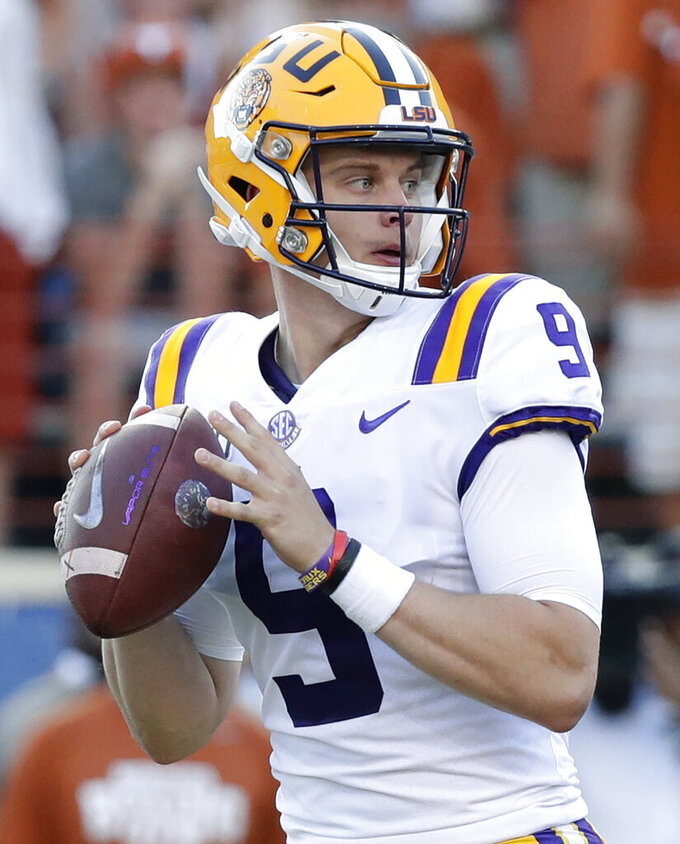 FILE - In this Sept. 7, 2019, file photo, LSU quarterback Joe Burrow (9) looks for a receiver during the second half of an NCAA college football game against Texas, in Austin, Texas. The SEC hasn't had a quarterback picked in the first round of the NFL draft since Johnny Manziel in 2014, and the league has never had more than one quarterback taken in the first round. It appears that's about to change, as Tua Tagovailoa, Joe Burrow and possibly Jake Fromm could make the next draft the best ever for SEC quarterbacks. (AP Photo/Eric Gay, File)

Alabama's young defense against QB Joe Burrow and LSU's offense. The Tide still has the league's No. 2 scoring defense despite a heavier-than-usual reliance on freshmen but it hasn't faced an offense like LSU's. The Tigers are averaging 377.6 passing yards, easily a league high. Alabama has standout cornerbacks in Trevon Diggs and Patrick Surtain Jr., along with safety Xavier McKinney.

LSU: Burrow's 2,805 passing yards and 30 touchdown passes both rank second nationally and his arsenal includes the league's co-leader in catches per game (Justin Jefferson) and leader in yards per game (Ja'Marr Chase).

Alabama: Tagovailoa is described as "a game-time decision" with a high ankle sprain that sidelined him for the Arkansas game. Though backup Mac Jones was solid in his absence, Alabama could have a hard time keeping up with Burrow & Co. without a healthy Tagovailoa.