No. 12 Georgia hopeful of LeCounte's return against Missouri 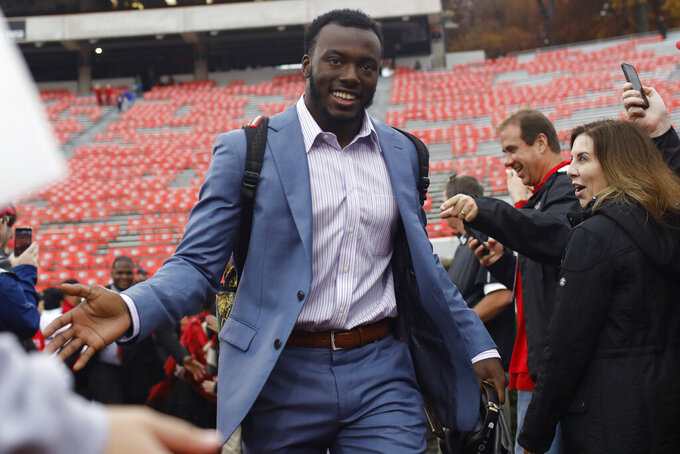 Georgia is hopeful that star safety Richard LeCounte will be able to play Saturday in a make-up game against Missouri, six weeks after he was injured in a motorcycle accident.

Coach Kirby Smart said LeCounte was progressing well though he was expected to be held out of contact drills in Monday's practice.

LeCounte sustained a shoulder injury, bruised ribs and several cuts and scrapes in the Oct. 31 accident, which occurred just hours after the No. 12 Bulldogs (6-2) returned to Athens from a 14-3 victory at Kentucky.

Smart also expressed optimism that defensive lineman Jordan Davis and running back Kendall Milton would be able to play against the Tigers (5-3), who have a three-game winning streak.

Davis has been out since sustaining an elbow injury against Kentucky, while Milton went down with a knee injury in a Nov. 7 loss to Florida.

LeCounte is tied for the team lead with three interceptions, despite missing the last three games. He was involved in the crash after recording a career-high 13 tackles and a fumble recovery against Kentucky.

Despite being a senior with NFL aspirations, LeCounte decided to finish the season with the Bulldogs rather than opting out.

Georgia still has two games remaining in the regular season after games against Missouri and Vanderbilt were postponed due to COVID-19 protocols.

The Bulldogs were initially scheduled to face Missouri on Nov. 14. The regular-season finale is now set for Dec. 19 against Vanderbilt, which was supposed to play at Georgia this past Saturday.