No. 12 UCF turns focus to AAC race against SMU 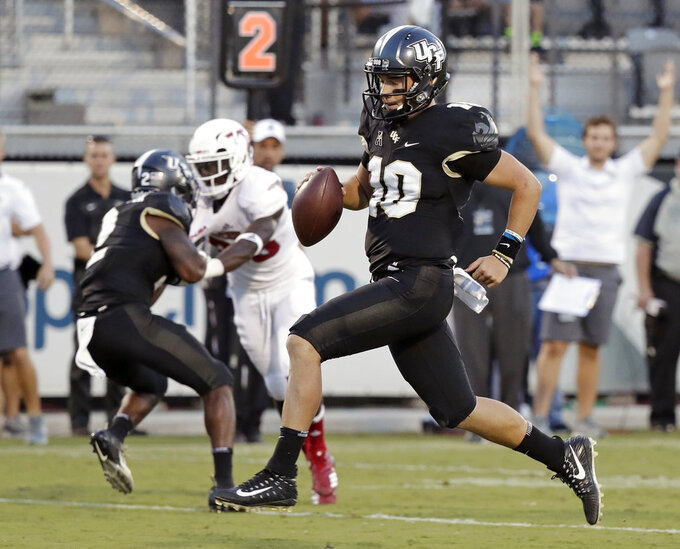 FILE - In this Sept. 21, 2018, file photo, Central Florida quarterback McKenzie Milton (10) runs for a 12-yard touchdown against Florida Atlantic during the first half of an NCAA college football game, in Orlando, Fla. He accounted for six TDs each of the last two games, passing for seven and running for five. UCF plays SMU on Saturday. (AP Photo/John Raoux, File)

ORLANDO, Fla. (AP) — No. 12 UCF feels criticism of its schedule is invalid and that the American Athletic Conference is proving that as the season progresses.

"We're going into week five. People are going to get a chance to watch us as we go down the road," coach Josh Heupel said, responding to whether he believes he should lobby for a higher ranking on behalf of the defending AAC champions.

"This is a great league. There's three teams on this side of the division that are undefeated right now," Heupel added, bringing Cincinnati and South Florida into the discussion. "It's not like they played cupcake schedules either. You better lace it up every week in this league. I think by the end of the season, this league will be appreciated for what it is."

UCF has won 17 straight dating to a year ago, when the Knights finished as the only unbeaten team in the Football Bowl Subdivision but were not invited to play in the College Football Playoff, won by once-beaten Alabama.

The biggest knock against UCF is its strength of schedule. Heupel said the best way the Knights can prove they're one of the best teams in the country is keep winning.

"College football's week to week. You go 1-0," Heupel said when asked if there are 11 teams in the nation that are better than the 12th-ranked Knights. "I haven't watched enough football. We're just focused on ourselves."

Some things to know about SMU and UCF, which has won seven of eight previous meetings between the teams, including 31-24 a year ago in Dallas:

"Athletic quarterback. Dynamic playmakers on the outside. Wide receivers who are also great in the return game on special teams. ... Running back has the ability to take it the distance," Huepel said, sizing up SMU's offense.

UCF's McKenzie Milton has thrown for 1,223 yards and 13 TDs through four games. He accounted for six TDs each of the last two games, passing for seven and running for five. Still, the junior from Kapolei, Hawaii — eighth in Heisman Trophy balloting last season — says he can be better.

"It speaks to who he is as a competitor, but that better be the way all 110 guys are inside of our locker room," Heupel said. "If you're satisfied with anything besides the win after the ball game, then I think you're leaving yourself up to not becoming what you're capable of and what you need to be to continue to be the team that we need to be."

BEST IS YET TO COME

The Knights are third in the nation in total offense at 582.8 yards per game and seventh in scoring at 48.8. They've scored at least 30 in every game during its school- and ACC-record 17-game winning streak.

"We have a lot of room for growth and development," the coach said. "Good teams do that throughout the year. Teams that go win championships get better every single week."