No. 13 Florida trying to end 5-game slide against rival FSU 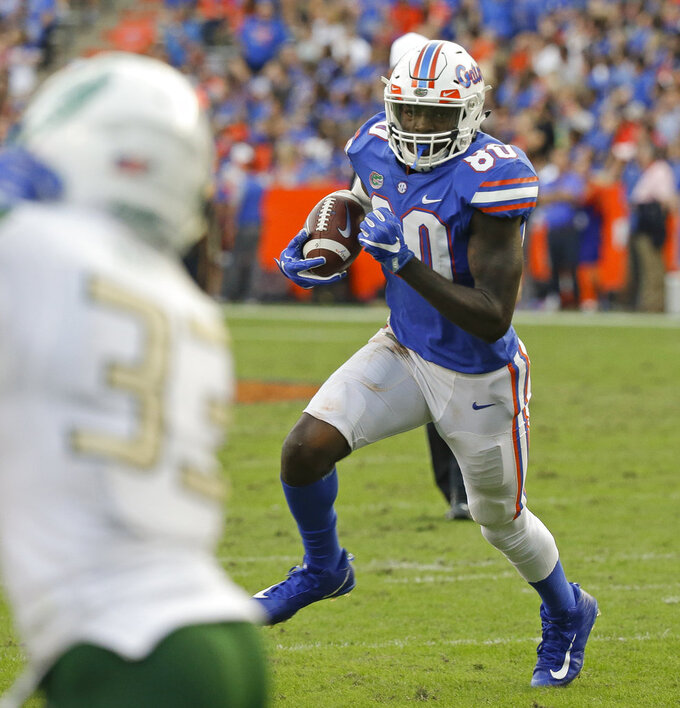 FILE - In this Nov. 18, 2017, file photo, Florida tight end C'yontai Lewis (80) runs for an 11-yard touchdown on a pass play past UAB cornerback Brontae Harris (33) during the first half of an NCAA college football game,in Gainesville, Fla. C’yontai Lewis’ losing streak to Florida State feels even longer than it actually is. Not only has the Florida tight end lost all four games to the Seminoles during his college career, but the fifth-year senior was part of another setback in 2013. Lewis was on his official visit to Florida that year and witnessed the program’s worst defeat (37-7) to rival FSU since 1988. So Lewis is essentially 0-5 against the ‘Noles. “It’s the biggest game of the year,” he said. “I’ve just got to get a win against them. ... I’ve just got to get that win, get the streak going. (AP Photo/John Raoux, File)

Not only has the Florida tight end lost all four games to the Seminoles during his college career, but the fifth-year senior was part of another setback in 2013. Lewis was on his official visit to Florida that year and witnessed the program's worst defeat (37-7) to rival FSU since 1988.

So Lewis is essentially 0-5 against the 'Noles.

Florida's five-game losing streak is its longest in series history. The Gators need to end the slide Saturday in Tallahassee to remain in contention for a New Year's Six bowl — a potential trip to the Peach Bowl or Fiesta Bowl.

"We got a great feeling about this game," linebacker David Reese said. "We just want to get that feeling out our mouth, the losing feeling, the record, all that. You know we hear it, but it's in the background. But we do hear it and we want to change that."

First-year Florida coach Dan Mullen playfully noted that he won all four meetings against FSU during his time as offensive coordinator (2005-09). Florida actually won six straight back then, but the 'Noles has dominated since by winning seven of eight.

There's more than bragging rights at stake, too.

Florida likely would lock up a spot in a New Year's Six bowl with a win, capping an impressive turnaround after last season's 4-7 debacle. They also have a chance to end the nation's bowl streak. Florida State (5-6) has made 36 straight.

"That'd be great," Mullen said, smiling. "I'd love to do it. That's what rivalry games are all about, right?"

The Seminoles haven't missed a bowl since 1981 — early in coach Bobby Bowden's tenure.

"It's very important," first-year FSU coach Willie Taggart said. "We're a prideful university. We pride ourselves on winning and you think about the streak, that's winning. We have been winning every year. So it's very important that we go out and give our fans, our alumni, our former players and coaches that have been here and our current players and coaches everything we can to see that we get this victory and keep it going.

"That's important to us and we know what is at stake and we got to go take care of business."

Florida opened as a four-point favorite — the first time since 2009 the Seminoles have been underdogs against the Gators.

Since that one, Florida has lost to FSU at home, on the road, on senior day and with postseason positioning on the line. It's been so one-sided of late that Mullen doesn't have any players on his roster who have experienced a victory against the Seminoles.