No. 13 UCLA trying to avoid another upset by Fresno State 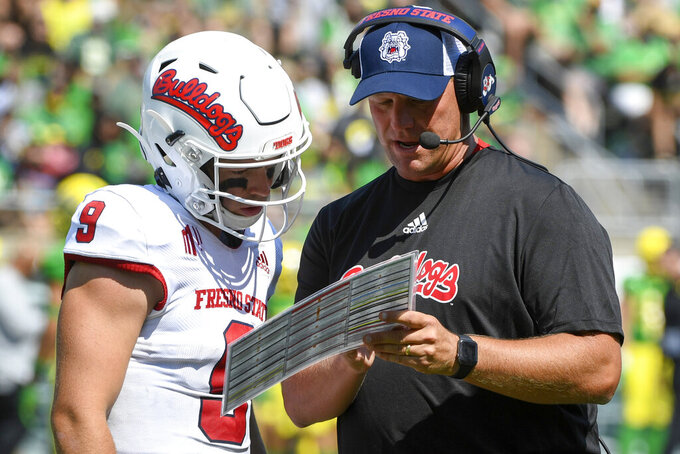 LOS ANGELES (AP) — If there is an early game that can measure the progress UCLA has made under Chip Kelly, it is likely to be Saturday night when the 13th-ranked Bruins host Fresno State.

The last time the two teams met at the Rose Bowl was 2018, when Kelly was in his first season. The Bruins got within 16-14 early in the second half before the Bulldogs scored the last 22 points to win going away.

UCLA's roster in that game was made up of only six seniors and had the fourth-highest percentage of underclassmen in the nation. After three years of growing pains, Kelly finally has an experienced and deep group, which has helped turn things around as the program seeks its first winning season since 2015.

“Everything is the most since we’ve been here, so we’ve definitely changed. That's what happens when the numbers are built back up and you add the depth that we have," Kelly said.

This will be the first game since 2017 that the Bruins (2-0) have played as a ranked team. They entered the rankings at No. 16 following their 38-27 victory over LSU two weeks ago and jumped up three spots in this week's poll after being idle last weekend. Kelly called last week an improvement week to correct some issues, including penalties and better snaps from center.

Even though the Bruins are favored by 11 1/2 points, according to Fanduel Sportsbook, Fresno State is expected to be a challenging game. The Bulldogs (2-1) — who have a three-game winning streak over UCLA — played Oregon tough in a 31-24 loss on Sept. 4 and have one of the nation's top quarterbacks in senior Jake Haener, who leads the nation with 1,009 passing yards.

Coach Kalen DeBoer, who was Fresno State's offensive coordinator during the 2018 game, said his team's situation has some similarities to three years ago. The Bulldogs had a tough loss to Minnesota before playing one of their best games of the year against the Bruins.

“I want to make sure we go in with the right response,” said DeBoer, who is in his second year in charge. “It is going to be an awesome atmosphere to be a part of. They have high expectations and there's a lot of confidence in our team.”

The Bulldogs' wins have come over a UConn team that does not have much going for it and last week against FCS Cal Poly.

Even though Haener has thrown for over 300 yards in two of the Bulldogs' first three games this season, he has struggled during the first quarter. In Saturday's 63-10 victory over Cal Poly, the Bulldogs punted on their first two possessions before scoring touchdowns on eight straight drives.

“He wants to go out of the gates and makes things happen, but you can’t overdo it now to where you are pressing,” DeBoer said.

Kelly compared Haener to Russell Wilson because of his ability to keep plays alive.

“We're going to have our hands full containing him. I've seen him take some shots and he gets up, keeps playing hard,” Kelly said.

Even though the Bruins have the often-dreaded Pac-12 After Dark 7:45 p.m. PDT kickoff at the Rose Bowl, Kelly was able to find some humor in the situation along with putting a somewhat positive spin on it.

“It’s a prime-time game in the Philippines, so let’s put on a good show for the people in Manila," he said. "People on the East Coast aren’t gonna see us play, but at least people in Manila waking up Sunday morning will get a chance to watch the Bruins play, so hopefully there are some Bruins fans out there.”