No. 14 Florida expects to face stiff test at Vanderbilt 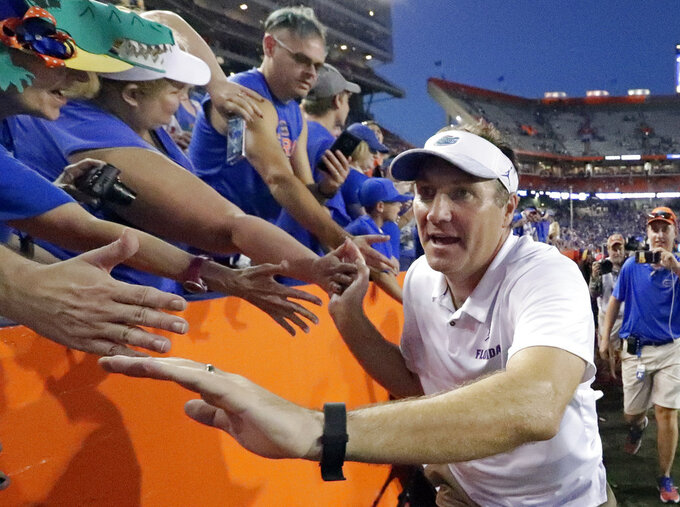 FILE - In this Saturday, Oct. 6, 2018, file photo, Florida head coach Dan Mullen celebrates with fans as he leaves the field after defeating LSU in an NCAA college football game in Gainesville, Fla. A week ago, the SEC had four teams in the top eight: No. 1 Alabama, No. 2 Georgia, No. 5 LSU and No. 8 Auburn. Instead, LSU, Auburn and Kentucky lost, allowing the three teams that beat them to either remain ranked or enter the AP Top 25. (AP Photo/John Raoux, File)

NASHVILLE, Tenn. (AP) — The 14th-ranked Florida Gators know they face a serious test Saturday against the Commodores at Vanderbilt.

The Gators took note of how Vanderbilt came up just short in a road loss at then-No. 8 Notre Dame last month and pushed No. 2 Georgia before losing 41-13 between the hedges. They've also battled the Commodores year in and year out even as Florida has won four straight and 26 of the last 27 in this series.

Add in a morning kickoff and a crowd likely just a third of the fans that saw Florida upset then-No. 5 LSU 27-19 last weekend , it's a recipe for a letdown.

"I feel like this game is more about us and the energy we bring to their stadium," Florida linebacker David Reese said.

The Gators (5-1, 3-1 Southeastern Conference) have won four straight for their best winning streak since 2015. Coach Dan Mullen has cautioned Florida against looking ahead to an open date before their annual showdown with Georgia.

Vanderbilt coach Derek Mason is trying to reset the season midway through the schedule with his Commodores (3-3, 0-2) having lost three of their last four. Mason liked what he saw for most of the first half against Georgia.

Some other things to know about Florida's trip to Vanderbilt:

Florida's defensive success is largely attributed to one statistic: tackles for loss. The Gators have notched at least eight tackles for loss in four games, including 11 last week against LSU. They had a season-high six sacks the previous week at Mississippi State. All those negative plays often stall drives and lead to punts or turnovers.

Four Gators have at least six tackles for loss.

"We just want to make sure we're confident in what we're studying and our work," Reese said. "Not being cocky, but confident, and know what we're doing and know that we can move fast and play because we know we've got the guys to do it."

Vanderbilt has done a good job of protecting senior quarterback Kyle Shurmur, ranking third in the SEC and 15th nationally allowing just one sack a game. Shurmur also has the SEC's leading receiver in Kalija Lipscomb with 45 catches, and he also has six touchdowns. The Commodores may get center Edigio DellaRipa back after he missed a game, allowing Bruno Reagan to return to his spot at right guard.

Mullen has developed a reputation for calling trick plays . The Gators scored key touchdowns using deception to beat Mississippi State and LSU the last two weeks. It was a double pass against the Bulldogs that worked for the only touchdown in a 13-6 victory and a throwback pass to the quarterback against the Tigers that set up the go-ahead score. The Gators are 4 for 4 this season on what Mullen calls "specials."

So what's in store against Vandy?

Vanderbilt is hoping senior linebacker Charles Wright is back after missing three games with an unspecified injury. Mason says Wright's experience allows him to identify what he's seeing, helping him play faster than the younger players who've replaced the linebacker. Linebacker Josh Smith says it also helps having a senior leader back.

"It's helpful to have somebody else on the edge," Smith said.

The Gators will need to play a bit cleaner than they did against LSU when they were flagged 11 times for 116 yards. Vanderbilt leads the SEC in fewest penalty yards per game even after being flagged a season-high nine times for 69 yards last week.