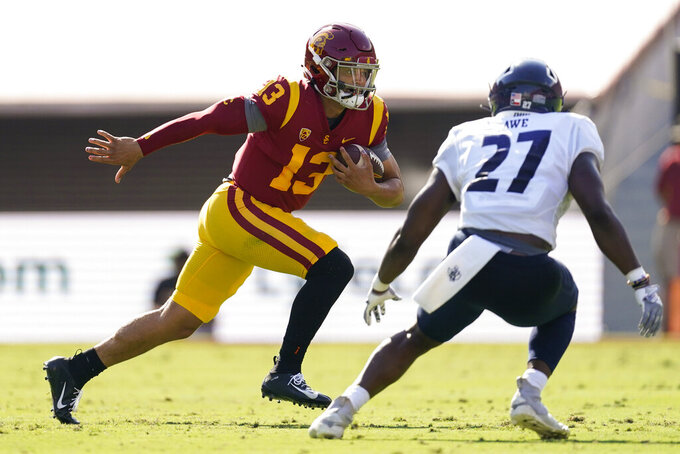 LOS ANGELES (AP) — Southern California scored on every one of its possessions in the first three quarters. The Trojans' defense also took three interceptions to the house, and a stadium filled with winning-starved fans went increasingly wild for each and every score.

Lincoln Riley's tenure is off to a rip-roaring start, and his players sound confident their revitalization of a powerhouse program will get even better.

“This is definitely a statement,” star receiver Jordan Addison said. “That’s what we wanted to do. Week 1, we had to show everybody that this wasn’t just no hype. We’re ready to play.”

Caleb Williams passed for 249 yards, rushed for 68 more and hit Addison for two touchdowns in No. 14 USC's 66-14 victory over Rice on Saturday.

Calen Bullock, Shane Lee and Ralen Goforth returned three of USC's four interceptions for touchdowns while the Trojans scored more points in Riley's debut than they did in any game under Clay Helton, who was fired last season before USC sank to its worst record in 30 years.

With Williams going 19 for 22 while leading six consecutive scoring drives to open the game, USC had its highest-scoring performance since 2008, when the program still reigned near the top of college football under Pete Carroll.

Riley and Williams left Oklahoma during the offseason and reunited in Los Angeles to rebuild the Trojans, who are hoping for a swift return to regular national title contention. Riley hasn't shied away from high expectations, and his team's first outing was tantalizing.

“It's a fun moment to finally be here,” Riley said. “I think the team was anxious and excited after all the buildup, and just ready to go play, and we responded well. ... It's one of those moments that you don't want to minimize. It's meaningful to us all, but those of us that have been on these journeys before, we understand this is just the beginning, and there's so much left, so much better to play.”

Newcomers made big plays all over the field for the Trojans, who welcomed 24 transfers in the offseason. Stanford transfer Austin Jones and freshman Raleek Brown rushed for early touchdowns, while Addison — last season's Biletnikoff Award winner at Pitt — scored on USC's opening drive and finished with five catches for 54 yards.

Darwin Barlow also rushed for a score in the Trojans' 538-yard attack.

“We have a lot of confidence, and we didn't just build that confidence coming out here in the first game,” Williams said. “We built that through workouts. We built that recently. Just coming together, all one, that's the best way to do it.”

Wiley Green passed for 69 yards for Rice before leaving with a right arm injury in the second quarter after Bullock returned his interception 93 yards. Orange County native TJ McMahon took over, but threw three interceptions in the schools' first meeting since 1971.

Ari Broussard rushed for two scores, and Cameron Montgomery had 99 yards on the ground for the Owls.

After Bullock's electrifying TD, Alabama transfer Lee brought his interception back 40 yards on the opening drive of the third. Goforth made a 31-yard TD return on Rice's next drive.

“There’s four plays that really led to this game going the way it did from a lopsided manner, and that’s really those four interceptions, and certainly the three that were pick-6's," Rice coach Mike Bloomgren said. “I mean, that’s something that’s really hard to deal with. I’m just proud that our kids did keep fighting."

USC hadn't returned three interceptions for scores since Nov. 11, 1982, at Arizona. The Trojans fell one short of the NCAA record for pick-6's.

“Hopefully we can get four pick-6's next week,” Riley said with a laugh when asked where his defense needs to improve. “That would be awesome.”

A success-starved crowd of 60,113 braved 95-degree temperatures around kickoff to welcome Riley, Williams, Addison and the rest of the new Trojans to the 99-year-old Coliseum.

“This stadium is so elite,” Riley said. “Even those of us that have coached in a lot of really cool stadium, this place, watching a college football game here, I don't know how it gets any better.”

Brown had a stellar debut with 76 combined yards on just eight touches, and he celebrated his impressive 14-yard TD run by striking a Heisman pose.

The freshman left the field postgame on a cart with ice around his right ankle, but the Trojans didn't seem seriously concerned about his health.

Rice: The Owls were competitive before the turnovers. The potential seriousness of Green's injury is a much bigger concern than the blowout, but Bloomgren had no immediate update on his quarterback's condition.

USC: The first quarter could resemble much of this season under Riley, who landed far more offensive talent than defensive difference-makers in the transfer portal. USC racked up 9.3 yards per play, but had some rough defensive stretches. Big 12-style, high-scoring shootouts could be the norm.

USC has spent nearly every September during the 13 seasons since Carroll's departure failing to live up to overly optimistic early rankings. This new team is still imperfect, but Riley's Trojans immediately look like they deserve their spot.

USC: At Stanford on Saturday.