No. 15 UNC, struggling Virginia to meet for 125th time 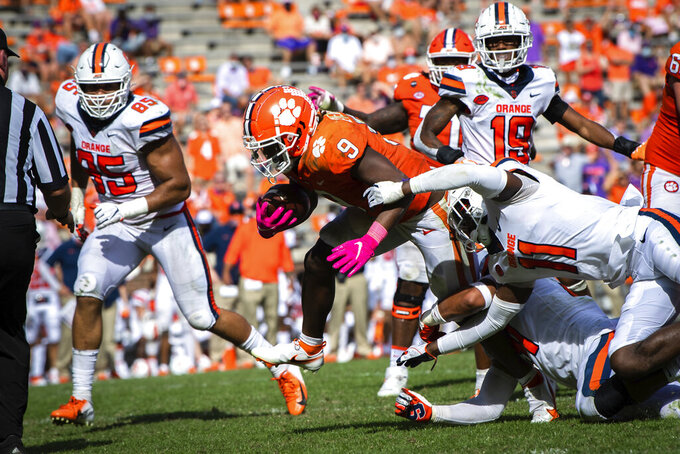 Clemson running back Travis Etienne (9) dives into the end zone for a touchdown in the second half of an NCAA college football game against Syracuse in Clemson, S.C., on Saturday, Oct. 24, 2020. (Ken Ruinard/Pool Photo via AP) 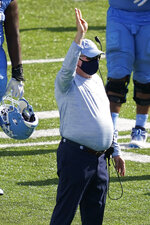 Here are some things to watch in Week 8 of ACC conference play:

No. 15 North Carolina at Virginia. Long billed as the south's oldest rivalry, the 125th meeting of the programs comes in prime time with both schools looking to get back on track. The Tar Heels (4-1, 4-1 ACC) climbed as high as No. 5 in the Top 25 before losing at Florida State two weeks ago, and Virginia (1-4, 1-4) , the defending Coastal Division champion, has lost four in a row. The Cavaliers, however, have won three in a row in the series and are 8-3 against teams coached by Mack Brown. Key for the Cavaliers against the Tar Heels' high-powered (37.8 ppg) offense will be a good start, something they haven't done all season. They've been outscored 55-10 in the first quarter and have not scored first in any game.

Virginia Tech at Louisville. This will be the first meeting of the schools since the 2006 Gator Bowl, and one where the Cardinals (2-4, 1-4) are hoping to continue what they started last week with a 48-16 victory against Florida State and the Hokies (3-2, 3-2) trying to rebound from an uncharacteristically sloppy 23-16 loss at Wake Forest in which they committed four turnovers. Louisville was ranked No. 18 early in the season before losing four in a row. The Hokies had climbed as high as No. 19 before their loss in Winston-Salem.

The last time Boston College faced Clemson, the Tigers prevailed 59-7, the third meeting in a row in which they held the Eagles to a solitary touchdown. The top-ranked Tigers (6-0, 5-0) have won 11 of 12 in this series since losing three in a row after B.C. joined the ACC. In their first year under coach Jeff Hafley, Boston College (4-2, 3-2) has face two ranked teams and lost both, 26-22 against North Carolina and 40-14 against Virginia Tech. Clemson, meantime, has won 27 consecutive games against ACC opponents, two shy of Florida State's all-time record.

Clemson running back Travis Etienne, already a two-time ACC player of the year, is 43 yards shy of setting a new career rushing record in the ACC, breaking Ted Brown of North Carolina State's record of 4,602 yards set from 1975-78. Etienne already holds league records for rushing touchdowns (64) and total touchdowns (71). ... North Carolina has two of the top four running backs in the conference with Michael Carter averaging 116.8 yards and Javonte Williams averaging 112.4 yards. They are the only teammates to have played more than one game who are both averaging better than 100 rushing yards.

Freshman defensive back Nick Anderson of Wake Forest is a walk-on who's making big play after big play for the Demon Deacons (3-2). He had three interceptions and 11 tackles last week as Wake stunned then-No. 19 Virginia Tech 23-16 and is second on the team in tackles. His play is also bringing the best kind of recognition. Following the victory over the Hokies, coach Dave Clawson announced that Anderson will be placed on scholarship.