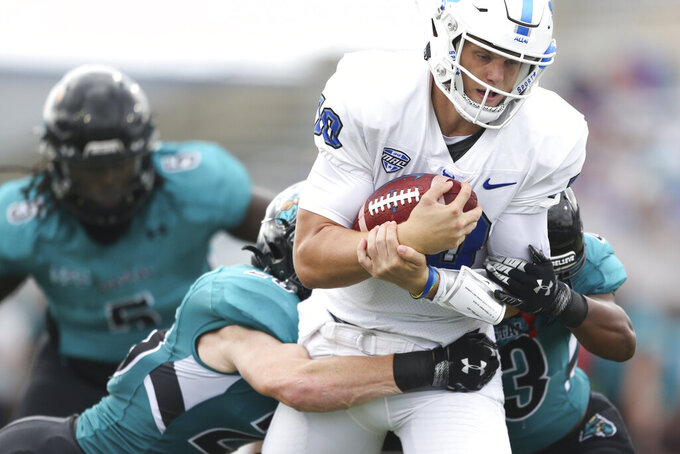 AMHERST, N.Y. (AP) — The high-scoring Chanticleers didn’t fire on all cylinders, but No. 16 Coastal Carolina embraced adversity in its first road victory of the season.

Grayson McCall threw for three touchdowns, Shermari Jones ran for 149 yards and another score, and Coastal Carolina ground out a 28-25 win at Buffalo on Saturday to remain unbeaten after three games.

“We didn’t play our best football game,” Jones said. “Yeah, we won and all that. But I feel like the Chants can be better.”

McCall, who entered the day leading the nation in passing efficiency and completion rate, was 13-of-19 passing for 232 yards with his first interception of the season.

Jaivon Heiligh caught four passes for 91 yards and a touchdown, becoming the fourth receiver in school history to surpass 2,000 career yards. Heiligh also dropped two long passes and Tyler Roberts dropped one when he was wide open with the end zone beckoning.

“We dropped a lot of passes that were big plays that could’ve went for touchdowns,” Coastal Carolina coach Jamey Chadwell said.

Jones battled a turf toe injury that forced him to the sideline in the fourth quarter to average 9.9 yards per carry and set a carer-high rushing total. A junior college transfer in his second season with the Chanticleers, Jones had 100 yards and two touchdowns in the season-opening win against The Citadel.

Buffalo (1-2) got within a field goal with 2:41 remaining. Kevin Marks’ 7-yard touchdown run capped a 92-yard drive that started when Logic Hudgens intercepted McCall in the end zone.

The Bulls rushed for 260 yards, led by career-high efforts from Dylan McDuffie (92 yards, one touchdown) and Ron Cook (83 yards). Marks, Buffalo’s lead back, finished with 64 yards. Kyle Vantrease was 13-of-20 passing for 146 yards.

“We did not run out of gas,” Buffalo’s first-year coach Maurice Linguist said. “We probably just ran out of time. Our guys continued to play, and they are disappointed, which you should be. But we will persevere. We will respond. And we will bounce back.”

Jones’ career-long 50-yard gain on the opening snap of the third quarter led to Isaiah Likely’s 6-yard touchdown catch, the first of the season for the Chanticleers’ all-conference tight end. Jones then plunged for a 1-yard touchdown at the start of the fourth quarter to extend Coastal Carolina’s lead to 28-17.

“It was a sloppy game,” said Chanticleers linebacker Silas Kelly, who matched co-captain Teddy Gallagher for the team lead with 10 tackles. “It was a very physical game. The most physical game we’ve had so far in our first three games. We played Chanticleer football and we were ready for it. At the end of the day, you get to feel that early in the season, in the third game of the year, and that’s something that is good for us.”

Coastal Carolina: Less efficient than they were in scoring 101 points in two home victories, the Chanticleers overcame early miscues and held on late to win their eighth straight regular-season game against a non-conference opponent. It was also CCU’s first win against a team from the Mid-American Conference after three losses.

Buffalo: Hosting a ranked opponent for the first time since 2014, the Bulls fall to 1-14 all-time against Top 25 teams. Having broken into the rankings last season and coming off a loss at Nebraska last week, UB is still seeking its first win over an FBS opponent under Linguist.

After blocking a punt and recovering the loose ball to score a touchdown in last week’s win against Kansas, Alex Spillum made another big play, in the kicking game. Spillum field a disguised Vantrease punt from his safety position and returned it 50 yards to give the Chanticleers field position at the Bulls’ 25 before their final touchdown.

“That changed the whole momentum there going into the fourth quarter,” Chadwell said.