No. 16 Wolverines' visit to No. 7 Penn State tops schedule 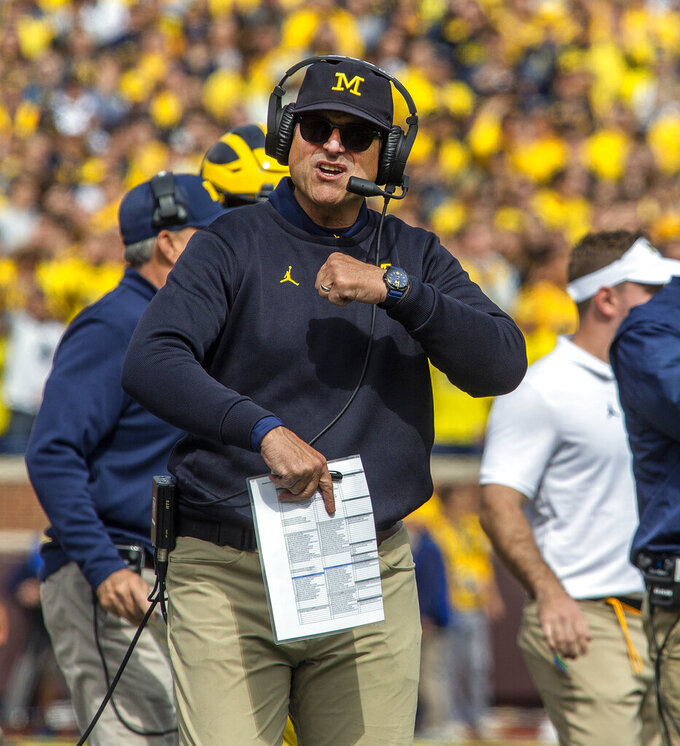 Michigan came into the season a trendy pick to win the Big Ten East. It's not even November and the No. 16 Wolverines must beat No. 7 Penn State as a road underdog on Saturday night to keep control of their destiny.

That 35-14 loss at Wisconsin last month dropped fifth-year coach Jim Harbaugh to 1-6 on the road against ranked opponents.

This is Penn State's annual "Whiteout" game, and the Nittany Lions are looking to build on their hard-earned win at Iowa last week and avenge last year's lopsided loss at Michigan.

The Wolverines' new offense is yet to impress against a quality opponent. Here's an opportunity against one of the nation's best defenses. The Nittany Lions have allowed 19 points in three Big Ten games.

Penn State is in the middle of a challenging stretch. After playing Michigan at home, trips to Michigan State and Minnesota are next.

LSU's Joe Burrow, whose performance against Florida further enhanced his credentials, goes against a middling defense at Mississippi State. Burrow was just so-so against the Bulldogs last year. He and the LSU offense are way different than they were then.

Oklahoma's Jalen Hurts will try to make the Sooners 8-0 against West Virginia since the Mountaineers joined the Big 12 in 2012. Through six games he's matched 2018 Heisman winner Kyler Murray's passing numbers and has surpassed his rushing numbers.

Tua Tagovailoa enters Alabama's home game against Tennessee having thrown for 1,155 yards and 15 touchdowns with one interception against three SEC opponents.

7 — Total points by which Pittsburgh has won its last three games.

16 — Consecutive games Oklahoma has scored at least 30 points, the longest streak in the nation.

22 — Consecutive games Mississippi State has recorded a takeaway, the longest active streak in the nation.

No. 18 Baylor (6-0, 3-0 Big 12) at Oklahoma State (4-2, 1-2): The Bears' sack-happy defense goes against the highest-ranked offense it's seen so far. Oklahoma State is coming off an open date and looking to get back on track after losing two of its last three.

Louisiana-Monroe (3-3, 2-0 Sun Belt) at No. 24 Appalachian State (5-0, 2-0): The Mountaineers have their highest ranking since joining the FBS ranks in 2014. Two of the Warhawks' three losses are against Power Five teams, and they've won both of their Sun Belt games by double digits.

Kalani Sitake's BYU Cougars enter their home game against Boise State having lost three straight since the overtime home win over Southern California. That leaves Sitake 22-23 in four seasons, 13-19 since he went 9-4 in 2016. Road losses to Toledo and South Florida in consecutive weeks — games in which the Cougars were favored — have left the fan base squirming.