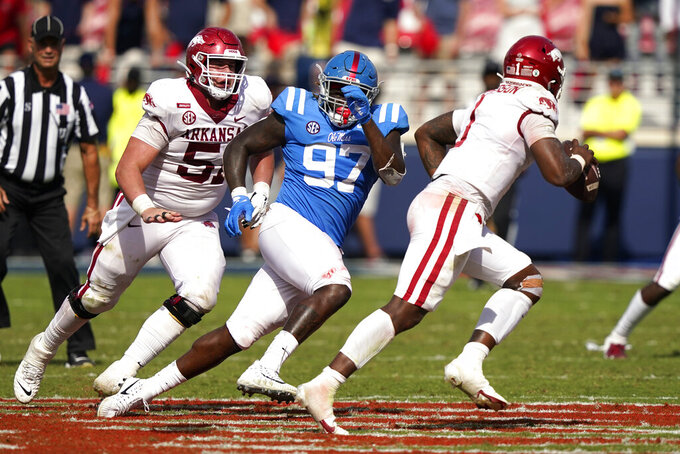 FAYETTEVILLE, Ark. (AP) — Arkansas has been on the road for so long that the Razorbacks may feel like strangers in their stadium.

No. 17 Arkansas has not played at home since Sept. 18, when the Razorbacks dismantled Georgia Southern 45-10. They are excited to host Saturday's game against Auburn.

“We need our fans," Arkansas coach Sam Pittman said. "We need our students to get here early and be raising heck this week. Our football team needs a home game and we need our fans to show up and help up win this game.”

Arkansas (4-2, 1-2 SEC) opened the season with four straight wins and climbed to No. 8 in the Associated Press poll before dropping back-to-back games to Georgia and Ole Miss. Auburn (4-2, 1-1) is coming off a 34-10 loss to Georgia under first-year coach Bryan Harsin.

Pittman said the Tigers have regained their tenacity on the defensive side under new defensive coordinator Derek Mason, the former Vanderbilt head coach.

“I really like their team,” Pittman said. “They are really physical and well coached. Defensively, they are back to where Auburn has been, (a) really dominating defensive line. They are just a really good football team.”

The Tigers rank third in the SEC in run defense (104.7 yards allowed per game), which will make for an interesting battle on Saturday against the Razorbacks’ run game, which ranks fourth in the SEC (244.8 yards per game).

“As you look at Arkansas — tough, physical,” Harsin said. “Those two things stand out. The coaches do a very good job. They’re two points away from being 5-1 and they’re playing aggressive. Those things all stand out. There’s a lot of really good players on their team."

REVENGE NOT A FACTOR

The controversial ending to last season’s game came up this week.

Late in the game, Auburn quarterback Bo Nix spiked a snap backward, and it was ruled intentional grounding rather than a fumble. The call allowed Auburn to keep possession of the ball, and Anders Carlton kicked a 39-yard field goal to lift the Tigers to a 30-28 win.

Pittman said wasn’t sure if or how he’d use that as motivation leading into this week’s game.

“I’ve gone back and forth on that,” he said. “We have a lot of the same players on our team, and I’m sure it’s the same with Auburn. But I think right now we just need to deal with winning home ballgames. I think that might be more important than a revenge factor. Auburn’s kids did not have anything to do with it. That was just a bad call.”

It’s been more than 30 games since Arkansas played an SEC game in which it was the favorite, but the Razorbacks enter Saturday’s game as a 4.5-point favorite against the Tigers, according to FanDuel Sportsbook.

“There is a lot of pressure that comes with success,” said Pittman. “So with that comes a lot of responsibility, but I’d much rather have it that way.”

Pittman heaped praise on Nix. In last year's game, he accounted for three touchdowns, passing for two and running for another.

“I think Nix is incredible,” Pittman said. “He extends plays as good as anybody in the country. You can’t get him on the ground. I think he’s a big-tme competitor. We are real concerned about him running the football.”

Arkansas quarterback KJ Jefferson is coming off a lights-out performance in the 52-51 loss to Ole Miss. The first-year starter passed for 366 yards and three touchdowns. He also rushed for three scores. On the season, Jefferson is 79-of-126 for 1,235 yards and nine touchdowns with just three interceptions. He has rushed for another 320 yards and five scores.

“Offensively, the quarterback can run it, throw it — do it all," Harsin said. “They play physical up front. They can run it and that’s an identity of that team.”

Harsin said Auburn's defense will be tested against Arkansas. The Tigers are allowing just 19.2 points per game, but they face an Arkansas offense that averages 32.3.

“I think it’s important to put two and two together — front end and back end — and being able to play ball,” Harsin said. "Just playing the type of defense ... we’ve put great defense together in spurts. If we’re able to do that for a full four quarters, I think we’ll have no issue going out and executing our plays.”