No. 18 N.C. State's defense to present challenge for Miami 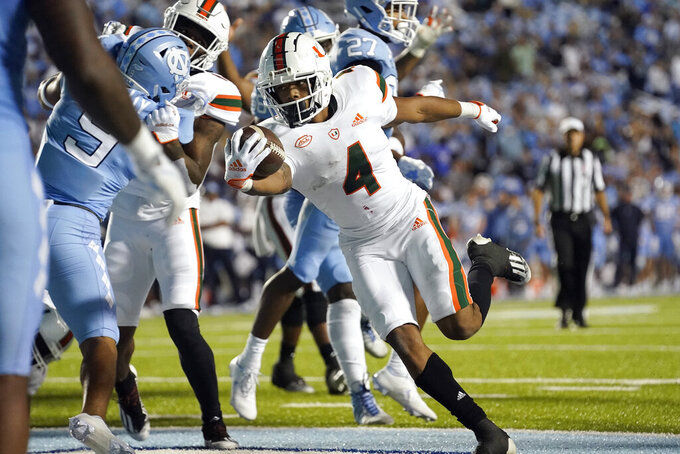 Miami running back Jaylan Knighton (4) scores a touchdown against North Carolina during the second half of an NCAA college football game in Chapel Hill, N.C., Saturday, Oct. 16, 2021. (AP Photo/Gerry Broome)

For N.C. State, it’s a chance to extend the program’s best start in four seasons; the last time the Wolfpack opened a season 6-1 overall and 3-0 in ACC play was 2017. And a win would keep them in the AP Top 25 for a fifth consecutive week, which would match the school’s longest run in the poll since 2002. Meanwhile, whatever remaining hope Miami has of fighting back into the Coastal race probably hinges on the Hurricanes finding a way to win this game.

Miami on third down vs. N.C. State’s defense: The Wolfpack lead the nation in third-down conversion defense, allowing them only 25% of the time. The Hurricanes converted 8 of 16 last week against North Carolina, but can’t afford third-and-long very often on Saturday.

N.C. State: QB Devin Leary. He’s on pace for the highest quarterback rating at N.C. State since Philip Rivers in 2003.

Miami: RB Jaylan Knighton. With Cam’Ron Harris (knee) out for the season, Knighton is now the Hurricanes’ go-to back.

At No. 18, N.C. State has its highest ranking in the AP Top 25 since a one-week stint at No. 16 midway through the 2018 season. ... Miami is one of two teams that haven’t held the lead at any point in an ACC game this season; Boston College is the other. ... The Hurricanes have scored in 20 of 24 quarters this season; N.C. State’s defense has not allowed any points in 13 of its 24 quarters. ... Miami has won the last three meetings and seven of the last nine between the schools. N.C. State hasn’t beaten the Hurricanes since back-to-back wins in 2007 and ‘08. ... Barring an ACC title game matchup, the teams aren’t scheduled to play again until at least 2025.