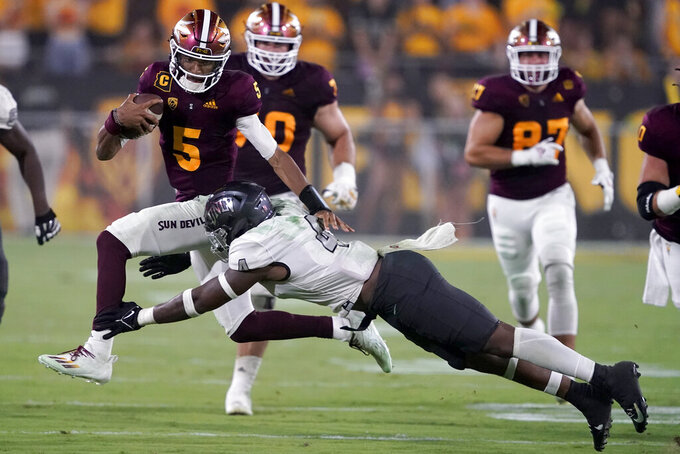 GAME OF THE WEEK: No. 19 Arizona State at No. 23 BYU. After winning their first two games by 27 points each, the Sun Devils (2-0) get their first big test of the season. The Cougars were arguably the best Group of Five team last season and are making a case again this year. BYU (2-0) opened the season with a gritty win over Arizona and pulled off an upset last week, knocking off then-No. 21 Utah to move into the AP Top 25 for the first time this year. The Sun Devils were sharper in last week's win against UNLV than they were in the opener against Southern Utah, but face a stiff challenge against a physical, experienced team on the road.

MATCHUP OF THE WEEK: Southern California at Washington State. The Trojans (1-1) will play their first game under interim coach Donte Williams after Clay Helton was fired on Monday. USC never reached elite status in seven seasons under Helton and the school fired him following a 14-point home loss to Stanford. The first post-Helton game won't be easy. The Cougars (1-1) stumbled out of the gate with a home loss to Utah State, but bounced back with a 20-point win over Portland State. Washington State can still put up big offensive numbers — QB Jayden de Laura accounted for four TDs last week — and beat the Trojans their last trip to Pullman in 2017.

INSIDE THE NUMBERS: Stanford coach David Shaw has 63 Pac-12 wins, one behind Washington State's O.E. Hollingbery for sixth on the conference's all-time list. The Cardinal play at Vanderbilt on Saturday. ... Arizona has lost a school-record 14 straight games after last week's home loss to UNLV. The Wildcats face Northern Arizona on Saturday and are 15-0 against FCS opponents since 2002. ... No. 16 UCLA, coming off a bye week, is looking to start a season 3-0 for the first time since 2015 when it hosts Fresno State on Saturday.

PLAYER TO WATCH: Oregon RB CJ Verdell. The Ducks (2-0) moved up to No. 4 in this week's AP Top 25 after knocking off No. 9 Ohio State, and Verdell was a big reason for the massive win. The junior ran for 161 yards and accounted for three TDs in the win, and has been climbing Oregon's all-time yards rushing list.

UPSET WATCH: Minnesota at Colorado. The Buffaloes nearly pulled off an upset against No. 7 Texas A&M last week before allowing a TD pass and losing 10-7. The Gophers have won 20 straight nonconference games. the longest active streak in FBS, and haven't lost outside the Big Ten since 2015. Minnesota also has won its last three games against Pac-12 schools. The Buffaloes have defense in their favor, though. They are allowing 8.5 points this season, fifth-best in the FBS.