No. 2 Ohio State dominating in way not seen since 1940s 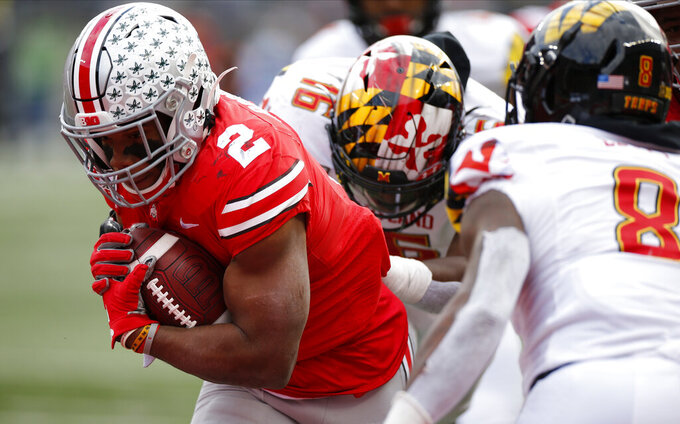 Ohio State running back J.K. Dobbins, left, breaks through the line of scrimmage to score a touchdown against Maryland during the first half of an NCAA college football game Saturday, Nov. 9, 2019, in Columbus, Ohio. (AP Photo/Jay LaPrete) 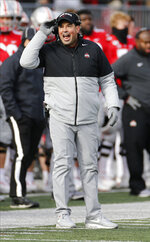 James Laurinaitis and the Big Ten network crew were meeting with Nebraska coach Scott Frost prior to the Cornhuskers’ game against Indiana late last month when the conversation turned to No. 2 Ohio State.

The Buckeyes (9-0, 6-0) are dominating in a way college football hasn’t seen since Franklin D. Roosevelt was president. And when Laurinaitis meets with Big Ten coaches, they tend to steer the conversation toward his alma mater, where he was a star linebacker.

“(Frost) goes, ‘I’ve been around a lot of teams. I’ve been on the field (coaching against) the 2014 team, and I just feel like this is the most complete, dominant college football team I’ve seen with my own eyes,’” Laurinaitis said. “And you’re like, ‘Oh, OK.’

Ohio State leads the nation in scoring at 51 points per game and is giving up the fewest in the country at 8.6. The last team to average at least 50 and allow fewer than 10 was Army in 1944, according to Sportradar.com. The cadets put up four shutouts in their 9-0, national championship season and didn’t allow more than 7 points in any game.

The Buckeyes have scored the most touchdowns (62) in the country and allowed the fewest (eight). They have more first downs (255) than all but four teams and the fewest yards allowed per game (214.8). Ohio State has scored over 40 in all but two games, hit the 50-point mark four times and reached 70 twice. That includes 73-14 romp over Maryland last week and a 76-5 blowout against Miami (Ohio) in September.

“Our team hasn’t really been in the fourth quarter of a dogfight yet,” said Ryan Day, in his first season after replacing Urban Meyer.

The Buckeyes are looking at another potential blowout when they visit Rutgers (2-7, 0-6) on Saturday. The schedule then takes a tougher turn with a home game against No. 9 Penn State and a trip to No. 14 Michigan. But Ohio State will get sack machine Chase Young back when they take on the Nittany Lions.

A preseason All-American and the nation’s leader with 13 1/2 sacks, Young was held out against Maryland because of concerns he violated NCAA rules by taking a loan last year from someone he describes as a “family friend” for living expenses. He won’t play against Rutgers, which is nonetheless a 52½-point underdog.

As for the lack of close games? Well, it’s also a problem Northwestern coach Pat Fitzgerald would love to have. A year after losing to Ohio State in the Big Ten championship game, the Wildcats (1-8, 0-7) have dropped seven straight, including a 52-3 beatdown by the Buckeyes.

Ohio State’s tightest games were decided by 24 points — 45-21 over Florida Atlantic in the opener and 34-10 against Michigan State last month.

“James Laurinaitis did our game last week (against Purdue) for BTN,” Fitzgerald said. “I told him the last time I thought I saw an Ohio State team like this one they have now was the teams that he played on.”

That 2006 team under Jim Tressel scored 35 points or more nine times and won its first 12 games before getting blown out by Florida in the BCS title game. But even that Buckeyes team got tested along the way.

The Buckeyes lost the championship game the following season to LSU when Laurinaitis was a junior and won it all under Urban Meyer five years ago when they beat Oregon. The offensive coordinator for the Ducks back then was Frost. And he has lost twice more to the Buckeyes since taking over at Nebraska in 2018.

“I think it's, honestly, as good as the team we played in the national championship when I coached in that,” Frost said. “Everybody's in danger of stubbing their toe somewhere, but I don't see it happening with them. I expect them to probably be in the playoff against some of the other best teams in the country.”

It’s not just the stars such as Young, running back J.K. Dobbins or quarterback Justin Fields. It’s the balance, the depth and the way Day has them rolling along after replacing one of the most successful coaches, Fitzgerald said.

“You can see their guys are performing at a very high level from the standpoint of consistency, and that’s what jumped out to us on tape,” he said. “Regardless of who was playing, the consistency of fundamentals and execution in all three phases was outstanding.”