No. 20 Kentucky seeks to start strong against Miami (Ohio) 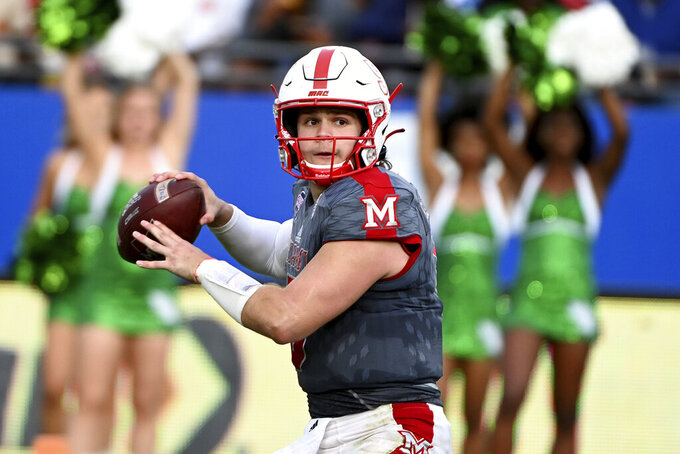 Line: Kentucky by 16 1/2 according to FanDuel.com Sportsbook.

Miami is coming off a bowl win and seeks an upset in the first of two ranked opponents in the opening three games. Kentucky begins with its first preseason ranking since 1978 and high projections of contending in the SEC East. A win helps coach Mark Stoops match legendary Paul “Bear” Bryant as the Wildcats' winningest coach.

Kentucky: Senior QB Will Levis has been touted as a possible Heisman Trophy candidate and first-round NFL draft choice. He’s coming off a breakout season in which he completed 66% of his passes for 2,827 yards and 24 touchdowns. He also rushed for 376 yards and nine TDs. He must bond with a new group of receivers but has Izayah Cummings (195 yards, 3 TDs) back.

The RedHawks are picked to win the Mid-American Conference East Division in a preseason media poll. ... Hippenhammer had career bests of 48 catches, 786 yards and five TDs after transferring from Penn State. ... Miami’s offensive line returns four players with 72 combined starts, including all 13 last season. ... Already Kentucky’s longest-tenured coach entering his 10th season, Mark Stoops can tie legend Paul “Bear” Bryant (60) as its winningest coach with a victory. ... Running back Chris Rodriguez Jr., who rushed for 1,379 yards and nine TDs last season, is out for the game and could face a multi-game suspension for off-field issues. ... Kentucky has won four of its last five openers and 11 of 15 overall.