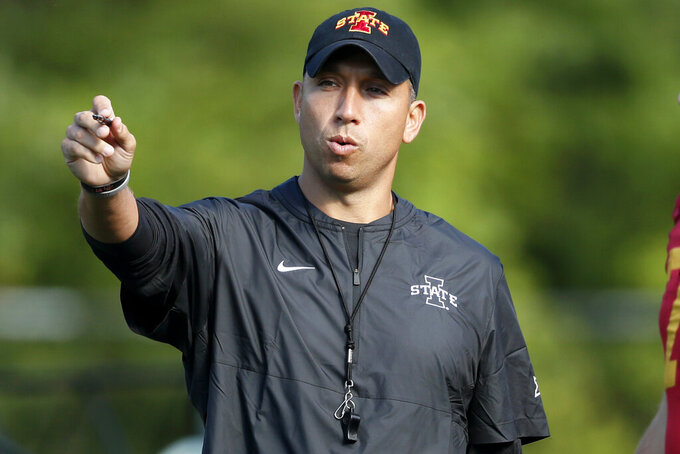 FILE - In this Aug. 2, 2019, file photo, Iowa State coach Matt Campbell gestures during an NCAA college football practice, in Ames, Iowa. The Cyclones were ranked in the preseason poll for the first time in 41 years behind a punishing defense, a young quarterback who seems destined for stardom and a coach who always seems to push the right buttons. And yet, the enthusiasm of Iowa State’s supporters might give way to a tiny bit of pause when they see Northern Iowa _ the Cyclones’ longtime FCS nemesis _ scheduled for Saturday’s opener. (AP Photo/Charlie Neibergall, File)

AMES, Iowa (AP) — Iowa State fans have never been more excited for a season to get started.

The Cyclones were ranked in the preseason poll for the first time in 41 years behind a punishing defense, a young quarterback who seems destined for stardom and a coach who always seems to push the right buttons.

And yet, the enthusiasm of Iowa State's supporters might give way to a tiny bit of pause when they see Northern Iowa — the Cyclones' longtime FCS nemesis — scheduled for Saturday's opener. The Panthers have beaten the 21st-ranked Cyclones three times since 2007, and they spoiled coach Matt Campbell's debut at Iowa State with a 25-20 win three years ago.

But this might be the best Cyclones team the Panthers have ever seen as they make their seventh trip this decade to Ames. Iowa State was picked third in the Big 12 preseason poll, by far its best showing since the league went to 10 teams in 2012.

"They're a handful," UNI coach Mark Farley said. "This isn't a fluke by any means why they're picked that high ... they're very, very good."

Northern Iowa returns 16 starters from last year's team, which made the FCS playoffs, and it was picked 20th in the national preseason coaches' poll. But quarterback Eli Dunne has moved on after starting for three seasons, and the Panthers will go with redshirt Will McElvain as his replacement. McElvain was the first player in the history of Iowa's highest prep classification to throw for over 2,000 yards and run for at least 1,000 in the same season, and he originally committed to Iowa State as a preferred walk-on before the Panthers offered him a full ride.

"I love his leadership, I really love his demeanor. It doesn't surprise me he's put himself in the position to lead this football team," Campbell said.

Iowa State listed five different backs on its depth chart this week as it looks to replace departed star David Montgomery. Veteran Kene Nwangwu might be iffy because of a hamstring injury, but expect at least four backs — including promising freshmen Breece Hall and Jirehl Brock — to get touches on Saturday.

"Until that happens, and it's proven, I think we're still at a little bit of a loss to say, 'Yeah we've definitely got guys that can do that,'" Campbell said.

Brock Purdy enters his sophomore season with a career completion percentage of 66.4, the second-best in school history. His passing efficiency rating broke the NCAA record for a true freshman, and he went 7-2 as a starter last year. Purdy did have two picks without a touchdown in Iowa State's 28-26 loss to Washington State in the Alamo Bowl, but he also threw for 315 yards.

Iowa State has four of the 11 players on the Big 12's preseason first-team defense: linemen Ray Lima and JaQuan Bailey, linebacker Marcel Spears Jr. and safety Greg Eisworth. ... The Cyclones have eight starters in all back from a defense that surrendered just 22.9 points a game. "Their front seven is excellent," Farley said. ... Northern Iowa led the FCS in turnover margin in 2018. ...The Cyclones have five starters back at offensive line, and four of them are seniors.

"To be able to build it through the offensive line and quarterback is where you would love to be as a program. We're finally at that point as our foundation." — Campbell.