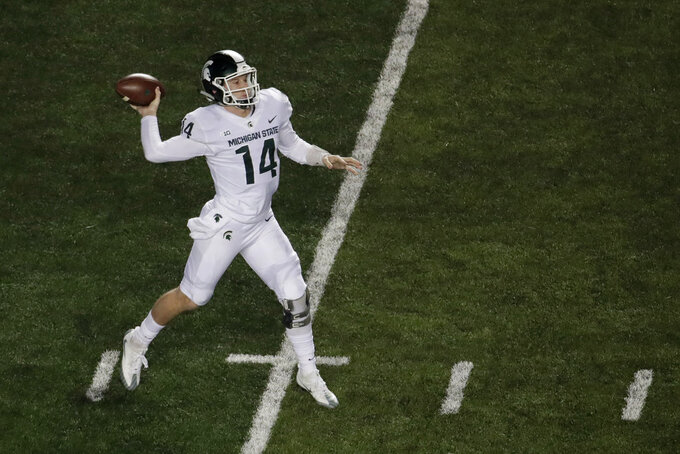 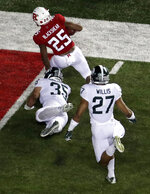 PISCATAWAY, N.J. (AP) — No. 21 Michigan State capped a terrific turnaround season with a dominant performance that probably would have been record-setting if the NCAA kept one for time of possession in a game. Brian Lewerke threw for a touchdown and ran for another and the Spartans held the ball for more than 47 minutes in defeating Rutgers 40-7 on Saturday to probably write a ticket to one of college football better bowl games. Michigan State (9-3, 7-2 Big Ten, CFP No. 16) will have to wait a week to get its bowl bid, but what they did against Rutgers was eye-popping. They held the ball for 47 minutes, 50 seconds. There is no NCAA single-game record for time of possession but Air Force claimed a mark last season after holding the ball for 45:14 in a win over Georgia State on Sept. 12, 2016. The important thing for Spartans coach Mark Dantonio and his team was flipping the script from 2016. They went 3-9 overall, 1-8 in the league and missed a postseason game for the first time since 2006. "It's most important for our players who are playing to experience a bowl, to experience what it is like to play a great opponent," Dantonio said. "We'll have another opportunity to play on national TV on New Year's Day and those things don't come along often. We have to run to those things and that was the message to our football team this week." Senior linebacker Chris Frey had a gut feeling that Michigan State would turn things around in a season where many felt getting six wins would be terrific. "I knew the guys on this team had the ability and the fire in their hearts to get to this point," Frey said. "To say we flipped it, and went 9-3 is just an unbelievable accomplishment." This was a outstanding performance by Michigan State, which got a career-best four field goals from redshirt freshman Matt Coghlin and short touchdown runs by Lewerke, Gerald Holmes and Madre London in the fourth quarter. Michigan State had a 431-112 advantage in total yards, limited Scarlet Knights' running game to a season-low 14 yards and no first down on six third-down chances in sending Rutgers (4-8, 3-6) to its third straight loss. Still, this was a better season for Rutgers coach Chris Ash, who endured a 2-10 overall record and an 0-9 conference record in his first season. Freshman Johnathan Lewis stepped in late in the first quarter and threw a 42-yard touchdown pass to Raheem Blackshear that pulled the Scarlet Knights (4-8, 3-6) within 16-7 at halftime despite having the ball less than six minutes. Lewerke said it felt like the offense was on the field a long time. Linebacker Joe Bachie said there was never a moment when the defense wasn't fresh. Rutgers ran 31 plays on offense and Ash conceded the time of possession was ugly. "That's a product of bad football. You know, that's what it is," Ash said. "We couldn't get off the field on third down, and we couldn't get first downs on offense. I hate to put this that bluntly, but there's no other way to sugarcoat it. We didn't get off the field on third down. We were really bad on third down tonight on both sides of the ball." Lewerke (21 of 31 for 222 yards) hit Connor Heyward on a 7-yard touchdown pass on the opening series and ran 3 yards for another TD in the fourth quarter. He had 13 carries for 56 yards and finished the season with 3,069 total yards, breaking the school record for a sophomore, previously held by Connor Cook (2013). Coghlin converted from 26, 26, 46 and 32 yards. "Nobody wants to finish like that, but we just have to build off it and get better next year," Rutgers junior linebacker Deonte Roberts. THE TAKEAWAY Michigan State: Going 3-9 a year ago resulted in the Spartans missing a bowl game for the first time since 2006. There is a chance they could be picked to play in the Outback Bowl in Tampa, Florida on Jan. 1. Rutgers: The Scarlet Knights certainly took a step forward this season, but they still were no competitive against the best teams in the Big Ten East. Against hio State, Penn State, Michigan and Michigan State, Rutgers was outscored 176-27. UP NEXT Michigan State: Will wait to next week to find out where it is headed. Rutgers: Season over. Open next year at home against Texas State, which finished 2-10. ___ More AP college football: http://collegefootball.ap.org and https://twitter.com/AP_Top25