No. 22 Auburn seeks to end recent futility at favored LSU 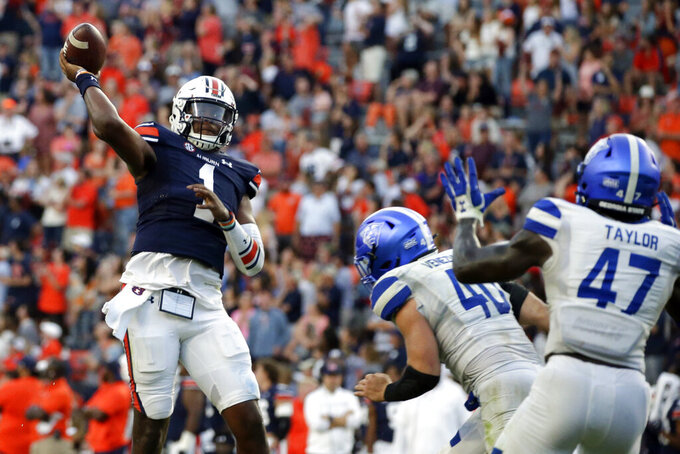 Auburn quarterback TJ Finley (1) throws a pass for a touchdown to take the lead over Georgia State in the final minute of the second half of an NCAA football game Saturday, Sept. 25, 2021, in Auburn, Ala. (AP Photo/Butch Dill)

BATON ROUGE, La. (AP) — Auburn cornerback Smoke Monday chooses to think of his team's two decades of futility at LSU's Death Valley as more a source of inspiration than intimidation.

“Yeah, we’re very excited. We know we haven’t won in Baton Rouge in a long time,” Monday said of Auburn's losses the last 10 times it visited LSU. “But I feel like we’re going to break that streak come Saturday — because I feel like this team really wants it.”

Auburn players expect to be more focused and ready this Saturday night at LSU (3-1, 1-0 SEC) than they were at home last week against mid-major underdog Georgia State. No. 22 Auburn (3-1, 0-0) escaped that match-up with a victory after reserve quarterback TJ Finley — who transferred to Auburn from LSU last offseason — threw a late, go-ahead TD pass before Monday iced the win with an interception return for a touchdown.

That tepid performance last week, and the quarterback questions that followed, could have something to do with why the FanDuel SportsBook listed unranked LSU as a 3 1/2-point favorite.

LSU's Tigers also have won three straight, including their SEC opener last week at Mississippi State, since falling out of the T op 25 with a Week 1 loss at current No. 20 UCLA.

LSU quarterback Max Johnson has been a productive passer and his defensive teammates have been getting considerable pressure in opposing backfields, leading the nation with 20 sacks. But LSU has struggled running the ball and with cross-ups in pass coverage.

Auburn has largely run the ball well, with Tank Bigsby gaining 100-plus yards in each of his first three games.

If that continues, it should take pressure off of whomever Auburn first-year coach Bryan Harsin decides to play at QB.

One key could be how well Auburn's QB and the offensive line handle not just LSU's pass rush, but communication amid the noise in 102,000-seat Tiger Stadium.

“It’s definitely going to come down to the offensive line,” Auburn offensive tackle Brodarius Hamm said. “They’re leading the country in sacks and we’re going to have to be hitting on all cylinders.”

Finley could get the start at quarterback for Auburn against his former team. The LSU transfer replaced Bo Nix in the second half and led the go-ahead drive late in a comeback win over Georgia State. Nix has been the starter for the past two-plus seasons after arriving as a five-star prospect.

“That position is extremely important, but everybody on the offensive side knows that we need to find ways to put the ball in the end zone,” Harsin said. “We’re kicking field goals. ... It’s been awhile since we’ve scored some touchdowns like we want to.”

Johnson has largely succeeded as a passer for LSU despite what Orgeron sees as inadequate blocking.

“Our pass protection has to improve,” Orgeron said. “It’s nowhere near where it needs to be. Too many free hits on the quarterback.”

Run blocking concerns Orgeron as well. LSU has averaged 80 yards rushing as a team, and Orgeron blames the lack of push up front for getting LSU into too many unfavorable third-down distances.

“We have some outstanding backs,” Orgeron said. “We just don’t have any room to run.”

Auburn is hoping to get linebacker Owen Pappoe and wide receiver Demetris Robertson back from injuries. The two were held out of the Georgia State game. Pappoe has 15 tackles in three games. Robertson, a Georgia transfer, has 11 catches for 112 yards and two touchdowns.

Top LSU cornerback Derek Stingley's status was uncertain after he sat out last week's game with a foot injury.