No. 22 NC State visits Boston College on Saturday in ACC 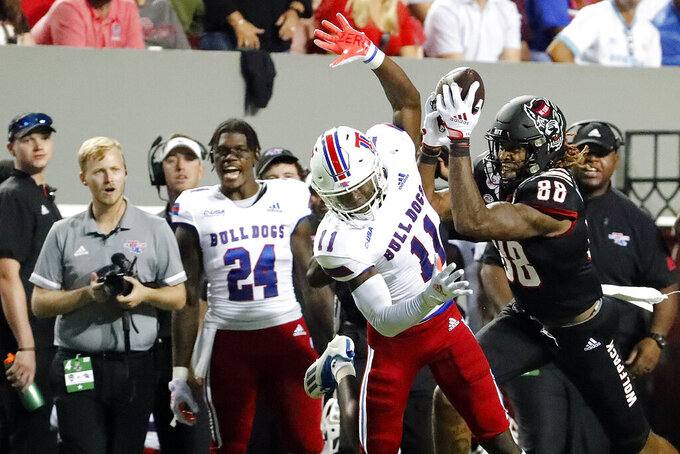 North Carolina State's Devin Carter (88) hauls in a pass in front of Louisiana Tech's Cedric Woods (11) during the first half of an NCAA college football game in Raleigh, N.C., Saturday, Oct. 2, 2021. (AP Photo/Karl B DeBlaker)

N.C. State took a huge step toward unseating six-time reigning league champion Clemson by beating the Tigers in double overtime in September, putting Dave Doeren’s team in control of its own destiny in the Atlantic Division race. The visit to BC marks the first of seven straight league games in that pursuit, with Jeff Hafley's Eagles’ only loss coming in a tight one on the road to Clemson earlier this month.

Boston College’s offense against N.C. State’s defense. The Eagles have the league’s No. 3 scoring offense at 35.6 points per game, fueled by an offense that generates 185.6 yards rushing per game – including Pat Garwo ranking fourth in the league (93.8 yards on the ground). The Wolfpack’s defense has held up against the run, allowing a league-low 92 yards per game. N.C. State is second in the league in scoring defense (15.8) and first in total defense (295.4).

BC: QB Dennis Grosel. The redshirt senior has taken over after an injury to Phil Jurkovec and threw for 311 yards and with two touchdowns in the loss to Clemson.

N.C. State: WR Devin Carter. The redshirt sophomore showed his big-play potential with a pair of TD grabs against Clemson, including the winning score in the second overtime.

N.C. State played four of its first five games at home, but now will play four of five on the road. The only home game in that stretch is Oct. 30 against Louisville. … N.C. State has allowed one rushing touchdown this year. … BC is 9-6 against N.C. State since joining the ACC for the 2005 season. … Only five of the league meetings have been decided by 10 points or fewer. … This is Boston College’s only home game in October. The Eagles visit Louisville and Syracuse before hosting Virginia Tech on Nov. 5. … The Eagles are converting a league-best 51.6% of their third downs this season.