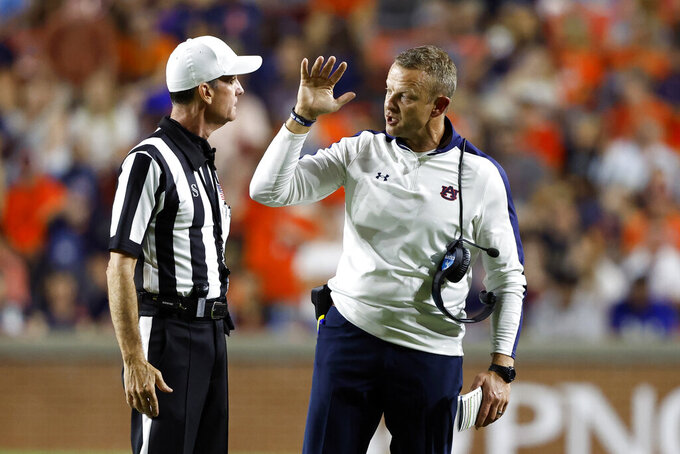 Auburn head coach Bryan Harsin talks with the referee Ken Williamson during the second half of an NCAA college football game against San Jose State Saturday, Sept. 10, 2022, in Auburn, Ala. (AP Photo/Butch Dill)

A Big Ten team is set to visit Auburn’s Jordan-Hare Stadium for the first time.

Now, the question becomes are the Tigers ready for No. 22 Penn State after struggling to beat San Jose State?

The Nittany Lions were installed as modest 3.5-point favorites entering Saturday's matchup of 2-0 teams, according to FanDuel Sportsbook. But Auburn has dropped four straight games against Power Five teams and held on for an unimpressive 24-16 win last week.

“This is a statement game for us to show them that we need to be recognized as one of the top teams in the country,” Tigers linebacker Owen Pappoe said.

The evidence of that is sparse so far under second-year coach Bryan Harsin, but his Tigers took Penn State down to the wire last season before losing 28-20.

Nittany Lions coach James Franklin, formerly of Vanderbilt, is well-acquainted with playing in Southeastern Conference country. He said players were “looking at me like I’m crazy” when he piped in loud music during last week’s practice — ahead of a home game — without explaining that it was all about preparing for Jordan-Hare.

“Football is really important there, in that region of the country,” Franklin said. “So, we know it’s going to be challenging and got a ton of respect for it, but we didn’t wait until this week to get started. We did it during training camp, but really did it last week.”

Harsin isn't dropping hints on his quarterback plans for the game. But T.J. Finley has started the past two games and been a more effective passer while Robby Ashford has made some big plays as a runner. The formula hasn't produced many passing yards, and both were intercepted last week.

The Tigers' 190 passing yards per game ranks 103rd nationally. However, opposing offenses have averaged 264.5 yards per game through the air against Penn State, which ranks 100th in pass defense.

Penn State freshman Nicholas Singleton had the best Beaver Stadium debut among Nittany Lion rushers, with 179 yards. He also had three runs of 44 or more yards, including a pair of long touchdowns.

Auburn’s best offensive weapon is tailback Tank Bigsby. He has run for 198 yards and three touchdowns this season and gained 102 in last year’s meeting with Penn State.

Auburn’s wide receivers, other than Ja’Varrius Johnson, haven’t been productive in the first two games. Johnson has seven catches for 158 yards. But the other receivers have collectively caught eight passes for 107 yards without a touchdown.

Penn State, meanwhile, had 17 different players catch passes in a rout of Ohio.

Both teams are hovering at or around .500 in games against the other conference. Penn State is 24-24 against current members of the SEC and 11-16 in the regular season. Auburn's record against current Big Ten programs: 12-11-2.

The Hurricanes fired him last December after his third season.

“I felt for him and how Miami handled the whole situation," Harsin said. “I didn't like that. He was a guy I worked with, that I have respect for. But I know he's a good coach. I know that he prepares his guys well and he cares from just working with him.”