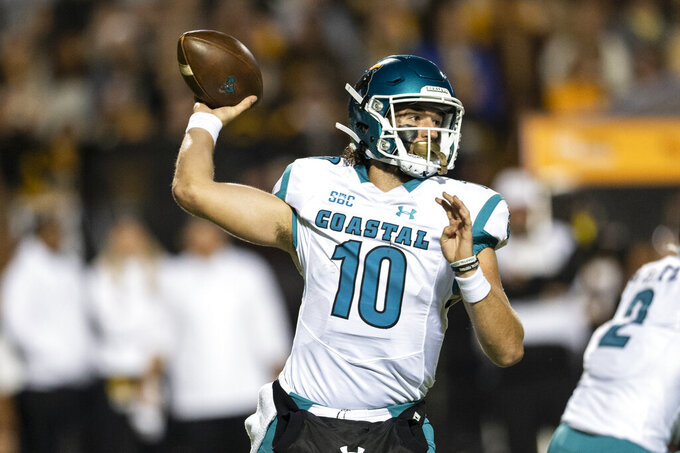 Line: Coastal Carolina by 17 1/2, according to FanDuel Sportsbook.

The chance to stay in the race for the Sun Belt's East Division title. Coastal Carolina and Troy are in a four-way tie for the top with Appalachian State and Georgia State. The loser, while not out, will need lots of help to make to the championship game.

Coastal Carolina QB Grayson McCall vs. Troy's pass defense. McCall leads the country in completion percentage (77.3) and is second nationally in yards per completion at more than 17 yards a play. The Trojans have been stingy against the pass, second only to Coastal in yards allowed through the air (189 yards per game).

Troy LB Carlton Martial: The junior had 18 tackles — yes, 18 — in the Trojans last game, a 31-28 victory over Texas State. It's the second time this season Martial has recorded double-digit tackles in a game. He's second in the Sun Belt in tackles this season.

Coastal Carolina TE Isaiah Likely: He has eight TD catches this season and is third in the Sun Belt with an average of 18.8 yards per catch. His teammate, receiver Jaivon Heiligh, leads at 19.3 yards per reception.

This is Troy's second visit to the Palmetto State in a month after falling at South Carolina 23-14 on Oct. 2. ... Coastal Carolina is playing its third straight mid-week game after beating Arkansas State 52-20 on Thursday, Oct. 7, and losing 30-27 at Appalachian State on Wednesday, Oct. 20. ... The Chanticleers are averaging 45.7 points a game while Troy is giving up just 19.6 points per contest. ... The Trojans have forced 17 turnovers this season while Coastal Carolina has only given it away three times in 2021. ... The Chanticleers have been in the AP Top 25 for the past 20 weeks. ... Coastal Carolina has won 11 straight at home since losing to Louisiana-Lafayette 48-7 on Nov. 7, 2019. ... Troy had three fourth-quarter interceptions, including one for the go-ahead touchdown in the 31-28 victory at Texas State two weeks ago.