No. 24 Houston opens season of promise vs. UTSA 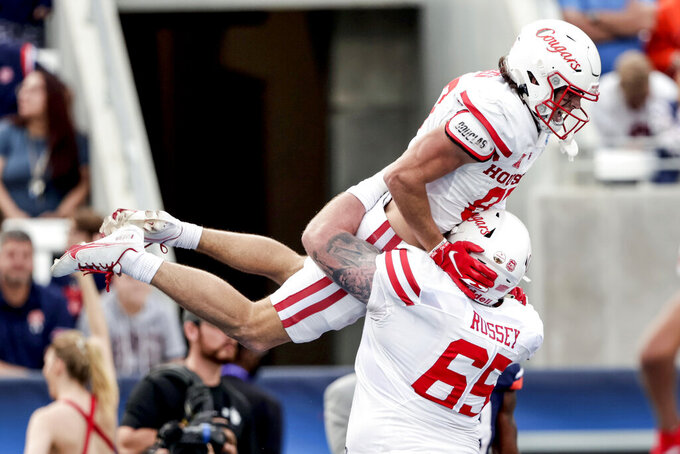 FILE - Houston wide receiver Jake Herslow (87) celebrates with offensive lineman Kody Russey (65) after scoring the go ahead touchdown against Auburn during the second half of the Birmingham Bowl NCAA college football game Tuesday, Dec. 28, 2021, in Birmingham, Ala. Cincinnati, Houston and Central Florida will depart the American Athletic Association for the Big 12 next year. Not surprisingly, those teams are picked to again finish atop the AAC before they leave. (AP Photo/Butch Dill, File)

Line: Houston by 4 1/2, according to FanDuel Sportsbook.

Houston is nationally ranked in the preseason AP Top 25 for the first time since 2016. The Cougars have been ranked for eight consecutive polls since Oct. 31, 2021. Houston’s resurgence comes in its final season in the American Athletic Conference before joining the Big 12 next year. UTSA was ranked in the Top 25 last season for the first time in program history. The Roadrunners spent six straight weeks in the poll until their first loss. Both teams finished 12-2 last season.

Houston and UTSA had prolific offenses last season and expect similar production this year despite some key losses. The Cougars averaged 35.2 points per game last season but lost top running back Alton McCaskill IV to a knee injury during spring practice. The Roadrunners averaged 35.5 points. In addition to running back Sincere McCormick departing to turn pro, offensive coordinator Barry Lunney Jr. left UTSA to accept the same position at Illinois. Roadrunner assistants Matt Mattox and Will Stein were promoted to co-offensive coordinators.

Houston: QB Clayton Tune passed for 3,546 yards and 30 touchdowns while completing 68.2% of his passes. Tune is on pace to join Case Keenum (19,217) and Kevin Kolb (12,964) as the only 10,000-yard passers in Houston’s prolific history. He finished with 10 interceptions last season but threw 192 consecutive passes without a pick. Tune is not mentioned as a possible Heisman Trophy candidate, but a strong start could vault him into that discussion.