No. 24 Spartans have 'chip' back with No. 6 Michigan looming 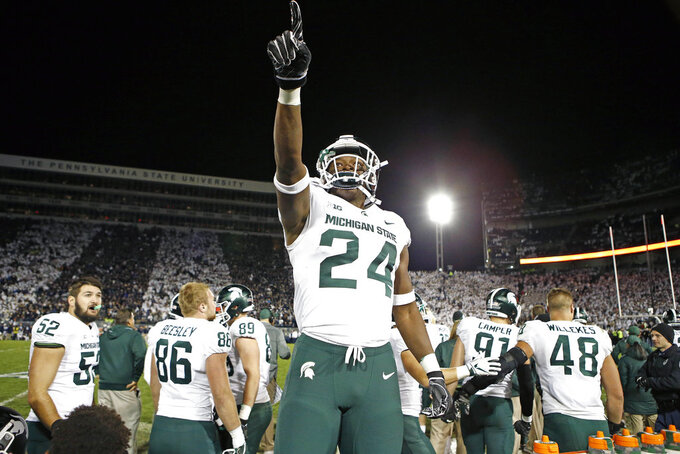 EAST LANSING, Mich. (AP) — After upsetting Penn State on the road last weekend, Michigan State feels it has a bit of its identity back.

Just in time for the annual clash with rival Michigan.

"Last week we brought the chip back and that's just something you can never lose, and same thing with the underdog thing and how they think of us," linebacker Joe Bachie said. "Never lose it. We understand what's at stake. It's a rivalry game."

The "chip" is a reference to the chip on the Spartans' collective shoulder — that feeling in East Lansing that Michigan State is constantly being disrespected. It's a powerful emotion, especially when the Spartans take on Michigan, and No. 24 Michigan State could use any psychological boost it can get for Saturday's showdown with the No. 6 Wolverines.

Historically, Michigan State has been overshadowed by the more storied programs in the Midwest, such as Michigan, Notre Dame and Ohio State. But under coach Mark Dantonio, the Spartans have won three Big Ten titles and made college football's playoff in 2015. So there are times the chip on Michigan State's shoulder seems a bit contrived — the Spartans came into this season ranked 11th in the country, three spots ahead of Michigan.

After an underwhelming start to the season, however, Michigan State was becoming an afterthought, especially following a home loss to Northwestern two weekends ago. Then the Spartans went to Penn State and knocked off the Nittany Lions on a last-minute touchdown.

"That loss honestly was one of the better things that could have happened to us, just to figure out what was wrong and figure out what we needed to fix," quarterback Brian Lewerke said. "I think that kind of showed last week when we came out and got a big win on the road."

Now Michigan State is in the type of situation the Spartans seem to relish. They're coming off a confidence-boosting win, they're playing Michigan at home — and yet they're still underdogs against a team they've beaten in eight of the last 10 meetings.

How much any of that matters this year remains to be seen. It's not just motivation that has helped Michigan State beat Michigan on a regular basis lately. The Spartans have simply been the better team in many of those seasons, and at times they simply overpowered the Wolverines. This week, that could be a tougher task. Michigan State is No. 1 in the nation in rushing defense, but Michigan is No. 1 in passing defense and No. 2 in total defense.

The Wolverines are coming off an impressive win of their own — a 38-13 rout of Wisconsin — and have won six straight since dropping their opener at Notre Dame.

The Spartans, however, are a dangerous team no matter how strong the opposition. The win over Penn State was Michigan State's ninth victory over a team in the AP top 10 since 2013. Only Alabama and Ohio State have more.

Michigan was in the top 10 a season ago when the unranked Spartans beat the Wolverines in Ann Arbor. Now both teams are in the Top 25 — and the last four times they've met when both were ranked, Michigan State won.

"People out in the media or whatever think of us maybe a little different than them, and that's fine with us," Bachie said. "We've got that chip back, and you know, we're going to continue that this week."