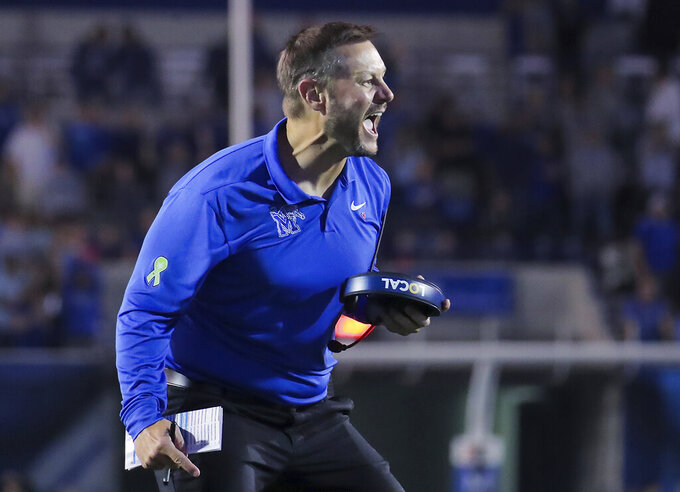 NEW ORLEANS (AP) — Ranked in the AP Top 25 for the first time in 24 seasons, Dorian Williams and his Tulane teammates have no interest in making it a brief stay.

“It’s good that finally people are recognizing what we are doing here, but that was never the goal,” said Williams, a linebacker whose 46 tackles pace the top-ranked defense in the American Athletic Conference. “The goal is to win the conference and go 1-0 each week. We can start by beating Memphis this week.”

No. 25 Tulane (6-1, 3-0 American), which never had won more than two in a row to start conference play since joining the league in 2014, can double that mark with another victory on Saturday.

The teams certainly are at the opposite end of the emotional spectrum.

Tulane surprised Kansas State 17-10 in September for coach Willie Fritz’s first win against any Power Five conference opponent, outlasted Houston in overtime for his first win in four tries against the Cougars on the road and followed with comfortable victories against East Carolina and South Florida.

Memphis has lost back-to-back games in gut-wrenching fashion, blowing a 13-point lead in the final 90 seconds at home against Houston and falling in quadruple overtime at East Carolina.

“Memphis has had a couple of tough games the last couple weeks," Fritz said. "But they are very talented.”

Memphis coach Ryan Silverfield asserted that his team is “not a group that’s hanging their head."

“Obviously disappointed and frustrated, but not going to quit,” Silverfield said. ”We got to find ways to execute when it really matters."

Tulane, which relied more on its defense earlier in the year, has become more balanced.

Third-year starting quarterback Michael Pratt is coming off back-to-back career-high performances, throwing for 326 yards against East Carolina and 329 against South Florida. Fourth-year running back Tyjae Spears had a career-long 75-yard, tie-breaking touchdown run against the Bulls, perhaps rounding into form for a reprisal of his 264-yard outburst in the Green Wave’s 2021 finale at Memphis.

Pair that duo with a defense that has produced the AAC player of the week four times already — linebacker Nick Anderson twice and nickelback Macon Clark twice — and it is easy to see how the Wave earned their breakthrough ranking a year after finishing 2-10.

Tulane’s only loss — 27-24 to Southern Miss as a double-digit favorite — came a week after its big victory at Kansas State. Fritz is guarding against a similar letdown from the excitement of the long-awaited ranking.

“You’d be hard-pressed to see me different from one day to the next,” he said. “I’m very consistent in how I coach and present information. If we have a great game, we flush that one down the toilet and start again. Our (players) know that’s how we approach things.”

Tulane is getting contributions from 2022 transfers, aiding the quick turn of fortune from last season.

Tulane has made opponents work extra hard for points.

The Green Wave had not allowed a gain of 50 yards or longer all year until a 73-yard South Florida touchdown pass against backups late in the fourth quarter. It allowed three plays of 30-plus yards through six games — tied for the fewest in the FBS — and 10 of 20 yards or more — tied for second best.