No. 25 Tulane offers a lesson in dramatic 1-year turnarounds 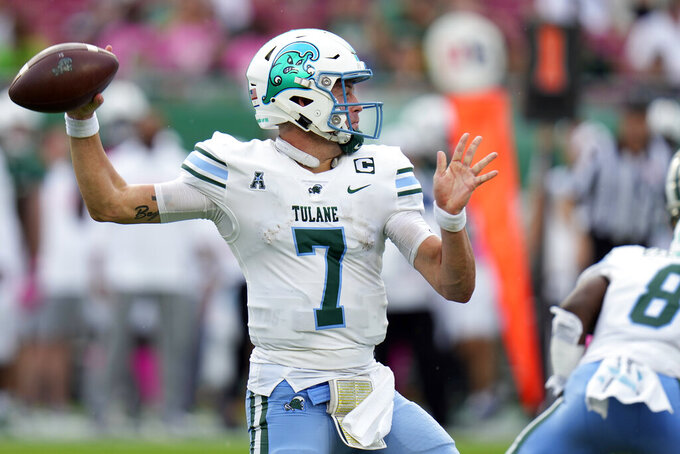 That's a stark change from one year ago, when Tulane was laboring through a 2-10 season in which seemingly everything went wrong.

“The position we were in at this time last year, it wasn’t great. It wasn’t fun," third-year Tulane quarterback Michael Pratt said. “Any time you face adversity, you can either go one of two directions. And I think the steps that this team took and the people that stepped up in leadership roles, we only had one option."

Such a turnaround could be a lesson across college sports.

With the same head coach, Willie Fritz, and just three starters who were not on last year's squad, Tulane has opened this season 6-1, highlighted by a victory at No. 17 Kansas State.

Now the Green Wave is bowl eligible in mid-October and ranked in the AP Top 25 for the first time since going 12-0 in 1998 — the year its two oldest players were born.

“We’re proud of it. There’s no doubt about that," Fritz said, even as he urged players to guard against complacency.

After all, Tulane's win at Kansas State was followed by its lone loss — at home — to double-digit underdog Southern Miss. Since then, Fritz has sought to pound home the mantra, “Go 1-0 this week,” and Tulane has rattled off three straight victories.

Tulane is in position reach double-digit victories for the first time in 24 years and contend for its first American Athletic Conference football title since joining the league in 2014.

It's “a nice place to be, especially coming off of last year when we were 28 days in a hotel in Birmingham (after Hurricane Ida), came out of it with seven (torn) ACLs, three shoulder injuries, because we weren’t able to lift and train," Dannen said. “It was a lost season.”

Tulane is a private university with about 8,000 undergraduate students on campus in New Orleans' historic, largely residential “Uptown” neighborhood. It bears little resemblance to the state college behemoths — such as LSU — that tend to dominate college football.

So while Tulane has sponsored football since 1902, spent three-plus decades in the Southeastern Conference and regularly produced NFL talent, it has largely struggled to win since the 1950s — save for a handful of glory years.

The Green Wave was scheduled to open 2021 by hosting Oklahoma, which would have been the highest-profile visiting opponent since Tulane moved games from the cavernous Superdome back to campus in 2014.

But Hurricane Ida, which struck southeast Louisiana on Aug. 29, 2021, knocked out power across the city and caused widespread damage, displacing Tulane athletes for a month. The football team landed in a Birmingham hotel where the kitchen was closed and there was no weight room.

“We were ordering Uber Eats for a month. There was a Subway nearby. A lot of pizza delivery,” Dannen recalled. “Not exactly the ideal nutrition plan for a Division I college football team.”

Because COVID cases were surging, area colleges reneged on offers to use their facilities, leaving Tulane to lift at fitness centers around Birmingham.

Tulane's 2021 opener was moved to Oklahoma, where the Green Wave looked inspired in a 40-35 loss, but injuries — and losses — mounted from there.

“You’ve got issues if coaches aren’t coaching hard, players aren’t playing hard and you see dissention in the hallways, in the locker rooms and at practice,” Dannen said. “That was never the case.”

During the offseason, Fritz brought in new offensive coordinator Jim Svoboda and new strength and condition director Kurt Hester. Dannen cited those changes; other staff additions focused on mental health, nutrition and academic support; and a natural disaster-free 2022 in New Orleans with setting the stage for a turnaround.

“There are no five-stars here that weren’t here last year," Dannen said. "But the environment has changed.”

Meanwhile, Pratt and Tulane's other captains — linebackers Nick Anderson and Dorian Williams, and offensive lineman Sincere Haynesworth — vowed to promote accountability by preaching the value of being on time and giving effort in every activity, from lifting and conditioning to practice and video review.

“Just the little details — and those are the things that pay off and make a big difference,” said Pratt, who has passed for 1,560 yards and 11 TDs this season while limiting interceptions to three. Pratt also has 196 yards and four TDs rushing.

Fritz was gratified by his captains' initiative.

“You hope that it happens and it’s got to happen naturally," Fritz said. “It can’t be something that I force feed.”

Another difference-maker has been fourth-year running back Tyjae Spears, who has scored nine touchdowns. His speed, strength and catching ability has him on pace to surpass 1,000 yards from scrimmage.

When Spears learned Sunday that Tulane was ranked, he initially worried such recognition might affect the team's focus.

He's since embraced it.

“We worked for that,” Spears said. "I feel like we deserve that. But, like coach Fritz said, we ain’t nowhere near done yet.”