No. 3 Cincinnati will try to keep the heat on against SMU 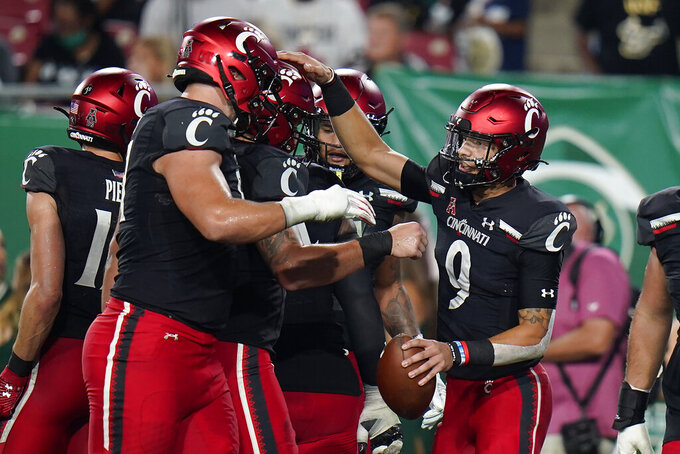 CINCINNATI (AP) — No. 3 Cincinnati will try to keep its College Football Playoff dream alive on Saturday against one of the better teams in the American Athletic Conference.

The Bearcats' matchup with SMU may not have the same luster as it would have had before the Mustangs dropped out of the AP Top 25 after Week 10, but there’s still a lot at stake. Besides staying in the CFP conversations, Cincinnati (10-0, 6-0 AAC, No. 5 CFP) can clinch a berth in the conference championship game.

“It’s the last guaranteed game for our seniors to play in Nippert Stadium,” Bearcats coach Luke Fickell said. “And it’s a big week. It’s a huge, huge game. This is a game we have been waiting for, for quite some time.”

Although SMU (8-2, 4-2) lost two straight and fell out of the AP poll, the Mustangs will be one of the tougher teams Cincinnati has faced this season, and they'll be looking for a signature win.

SMU leads the AAC in total offense (498.7), scoring offense (41.6), passing offense (329.0), and first downs (260). Junior QB Tanner Mordecai was named AAC offensive player of the week for the fourth time this season. The Oklahoma transfer has at least four touchdown passes in five of 10 games while passing for 300 or more yards eight times.

“You can see their evolution,” Fickell said. “(Mordecai) is a very, very, very good one. He does a lot of things, not just throwing the football. It’s how he makes things happen under pressure. And he can run a little bit.”

Although the Bearcats are favored and have won four of their five games against them, the Mustangs feel like they are a primed for the upset. Cincinnati won last year’s meeting 42-13, but the prior two matchups were close, including a 31-28 win for SMU in 2017 at Nippert Stadium.

The Mustangs snapped a two-game losing streak with a 55-28 win at UCF last week.

“Our guys last week were really focused because we were really disappointed in our performance,” SMU coach Sonny Dykes said. “Our guys just don’t quit. That’s been our mentality. It will be similar Saturday."

Cincinnati, meanwhile, just continues to win, albeit not as impressively as some might expect. Although heavy favorites in each of their past four games, the Bearcats have won by an average of 13 points. When they’ve had the opportunity to blow out their opponents, the Bearcats haven’t of late.

“We’re in a good spot. But we’re not in our best spot,” Bearcats quarterback Desmond Ridder said. “We need to be playing our best ball at the end of the year.”

Ridder threw a pair of touchdown passes in last week’s win at South Florida, giving him 79 for his career to move past Gino Guidugli (2001-2004) into first place on the school’s all-time list. Guidugli is the Bearcats’ current passing game coordinator.

“We don’t like to overdo or point out a lot of individual things, but this one needed to be recognized,” Fickell said of Ridder’s record-breaker. “It’s even more special when you can take a jab at Coach Guidugli.”

SMU is 24-8 since 2019, which includes a 14-1 record at home. But the road has been unkind to the Mustangs, who have lost their last two road games at Houston and Memphis by a combined 10 points. Cincinnati owns the nation’s second-longest home winning streak, but Dykes said he won’t change things up this week. “We do the same routine on the road,” he said. “The schedule doesn’t really change. We’ve been a good home team. If you want to win a championship, you have to play well on the road.”