No. 4 Clemson opens in Atlanta against ACC rival Ga Tech 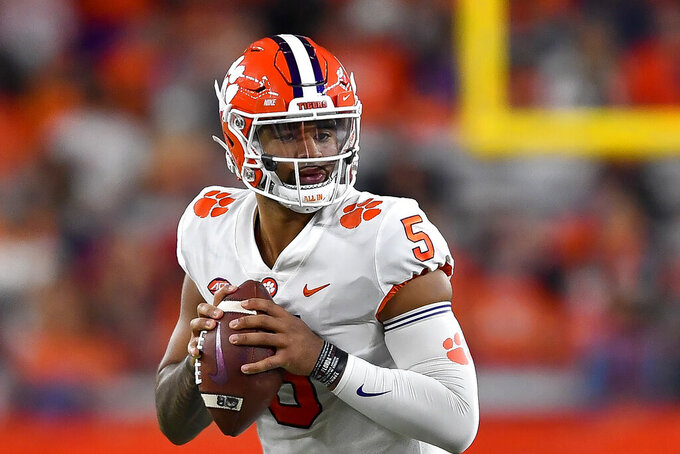 Line: Clemson by 22 1/2, according to FanDuel Sportsbook.

Clemson is looking to make up for a subpar season by its standards. The Tigers went 10-3 in 2021, ending their streak of six straight Atlantic Coast Conference titles and the same number of consecutive appearances in the College Football Playoff. Georgia Tech desperately needs a big win to take some of the heat off coach Geoff Collins. He appears to be coaching for his job after winning just three games each of his first three seasons guiding the Yellow Jackets.

Georgia Tech QB Jeff Sims vs. Clemson's defense. The Yellow Jackets need a big season out of their third-year quarterback to have any chance of defying the skeptics. Sims has a strong arm and good running ability, but he hasn't been able to put it all together consistently. He'll have his hands full against a Clemson defense that allowed just 14.8 points a game in 2021 to lead the ACC.

Clemson: QB DJ Uiagalelei. Highly touted after two stunning performances during his freshman year, Uiagalelei struggled in his first full season as the Tigers' starting quarterback. He battled injuries, was a bit too bulky and struggled to deal with critics who blamed him for Clemson's three-loss season. Uiagalelei insists he'll be a far different player than the one who completed less than 56% of his passes, with 10 interceptions and nine TDs.

Georgia Tech: WR E.J. Jenkins. The Yellow Jackets want to take advantage of Jenkins' imposing size. The transfer from South Carolina is 6-foot-7, towering over most defensive backs, and his 243-pound frame generally gives him a major weight advantage as well.

Clemson has won seven straight meetings against Georgia Tech, including a 14-8 victory a year ago. The last time the teams played in Atlanta, the Tigers romped to a 73-7 victory in 2020 at Tech's Bobby Dodd Stadium. ... Collins has a record of 9-25 at Georgia Tech. Only Bill Curry (8-24-1) had a worst winning percentage after three seasons in the school's modern era. ... Clemson has 11 straight 10-win seasons, joining Alabama and Florida State as the only programs to accomplish that feat. ... The Tigers are one of three schools coming off 10-win seasons that Georgia Tech faces in a brutal stretch over its first five games. The others are Ole Miss and Pittsburgh.