No. 5 Clemson defense AWOL at times after hyped offseason 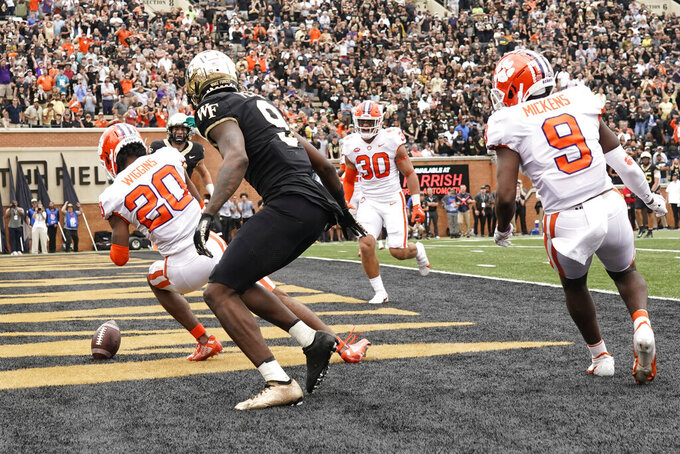 CLEMSON, S.C. (AP) — Clemson's defensive “Avengers” have yet to assemble.

The fifth-ranked Tigers were touted among the country's strongest defenses during the offseason, and the defensive front even gave themselves that hokey movie moniker. But so far, Clemson (4-0, 2-0 Atlantic Coast Conference) hasn't looked anything like the powerhouse defense it's been the previous 10 seasons.

That must change in a hurry with Clemson facing No. 10 North Carolina State (4-0) in a top-10 showdown for control of the ACC Atlantic Division on Saturday night.

The Tigers' slippage was evident last week in a drama-filled, 51-45 overtime win at No. 22 Wake Forest where the Tigers surrendered 447 yards total and six TD passes to Demon Deacons quarterback Sam Hartman.

“In totality, we didn't play as well as we can,” Swinney said.

And it followed troubling performances against FCS Furman (384 yards allowed) and Louisiana Tech of Conference USA (317 given up).

That's not something heard very often about the Tigers' D. It spent much of the past 10 seasons among college football's best, only twice in that span finishing a season outside the top 10 in total defense.

That was under Brent Venables, part of two national championships as Clemson's coordinator who left to become Oklahoma's head coach last December.

Swinney stayed in house, promoting defensive analyst Wes Goodwin to succeed Venables. The unit has yet to fully click in Goodwin's short tenure.

“I always say it's never as good, never as bad as it seems,” Goodwin said.

While the pass interference calls and Wake's big plays — the Deacons had four TD passes of 19 yards or more — were what stood out, “our guys did a lot of good things,” Goodwin said.

“As bad as that third quarter was, those rose to the occasion and went out and won the game,” he continued. “And that was really cool to see.”

“Their offense is one of the best in the country,” Swinney said. “Devin Leary is special. He's a pro.”

So, according to NFL projections, are many of Clemson's defensive starters, like tackle Bryan Bresee, ends K.J. Henry and Myles Murphy, and linebacker Trenton Simpson.

Goodwin acknowledged that some of his calls didn't work at Wake Forest. “But I think the biggest thing is I didn't panic,” he said. “Looking guys in the eyes on the sideline (and) they see you're not panicking and you've got confidence in what you're doing.”

Goodwin said he remained calm and connected, and so did his players. “And we ended up winning it at the end,” he said.

Both Swinney and Goodwin said any problems will be fixed in short order. Some issues involve players' health. Starting defensive end Xavier Thomas hasn't played all season due to a broken foot suffered in fall camp.

Starting safeties Andrew Mukuba and Sheridan Jones, along with Malcolm Greene were all missing last week and Swinney isn't sure if they'll be ready for the Wolfpack.

North Carolina State coach Dave Doeren said Clemson's played a lot of people in the secondary this season and may not be as multiple there as in past seasons. But he said the Tigers' defensive backs are playing hard.

Doeren said Clemson's secondary coach Mike Reed is a skilled teacher and despite what happened last week, “I know he'll have his guys ready.”

Clemson's Wiggins, flagged three times for pass interference against Wake Forest, also knocked away Hartman's final pass to the end zone to seal the win. He vowed the defense would improve going forward.

“I know what I can do,” Wiggins said. “I'm never going to have another game like that.”