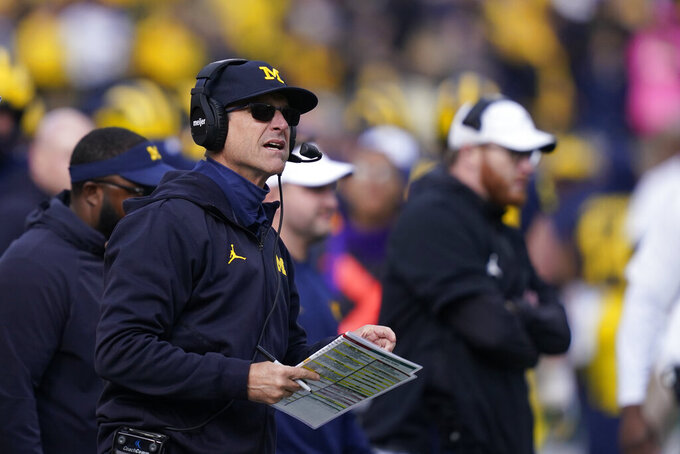 Michigan head coach Jim Harbaugh watches from the sideline during the second half of an NCAA college football game against Northwestern, Saturday, Oct. 23, 2021, in Ann Arbor, Mich. (AP Photo/Carlos Osorio)

ANN ARBOR, Mich. (AP) — Jim Harbaugh has almost seen it all in the Michigan-Michigan State rivalry.

Harbaugh grew up watching the series as the son of an assistant coach under Bo Schembechler in the 1970s. He played in the rivalry as a star quarterback for the Wolverines, breaking his arm in the 1984 game. He is 3-3 as a coach against the Spartans.

The 57-year-old Harbaugh, though, hasn't experienced anything like this week's matchup because both teams haven't met ranked as high as they are in his lifetime.

The game is always a big deal in Michigan, where everyone knows someone who hails for the maize and blue or pulls for the green and white, regardless of the records and the stakes.

With Big Ten and College Football Playoff ramifications, the game has broad national interest, too. The winner will be in position to contend for a conference championship and perhaps a national title.

For just the fifth time, both teams are ranked among the top 10 and for the first time since No. 7 Michigan beat No. 9 Michigan State in 1964. The last time the Wolverines and Spartans were ranked as high as they are this week was 1961, two years before Harbaugh was born, when No. 5 Michigan State shut out No. 6 Michigan.

Fox's “Big Noon Kickoff” show will be in East Lansing, Michigan, as expected because the network will carry the game, but “College GameDay" will be there, too, even though the game won't be on ESPN or ABC.

“People outside of the state want to see what happens because they get caught up in the number before the school's name and it is significant anytime there's a matchup with top-10 teams," ESPN analyst and former Michigan star receiver Desmond Howard said Monday. “It's going to be interesting because we'll learn a lot more about both teams after they play."

Neither team has beaten a team that is currently ranked, but that changes starting this week. Matchups with No. 5 Ohio State and No. 20 Penn State are coming for both over the next month.

Michigan and Michigan State, two of nine undefeated teams in FBS, started the season unranked and one of them will keep climbing with an unblemished record.

“We understand that this is not just another game. We get that," Spartans coach Mel Tucker said. “We know there's a lot of excitement, leading up to this game and surrounding this game. The most important voices will be the voices inside of our building. We need to eliminate distractions."

Tucker attempted to quiet one potential distraction at his weekly news conference, where he was asked about reports that have mentioned him as a candidate to be LSU's next coach.

“My focus is on the upcoming game versus going on the road," Tucker said. “That’s what my concentration, all my focus, is."

LSU and coach Ed Orgeron have agreed to part ways after this season. Some have suggested Tucker might be a fit after turning around the Spartans and with his ties to the Tigers, where he was an assistant coach a generation ago.

Tucker last year became the second Michigan State coach to beat Michigan in his first season, joining Alabama coach Nick Saban, who did it in 1995. The former Colorado coach started his career as a graduate assistant for Saban at Michigan State in 1997 and later reunited with him at LSU.