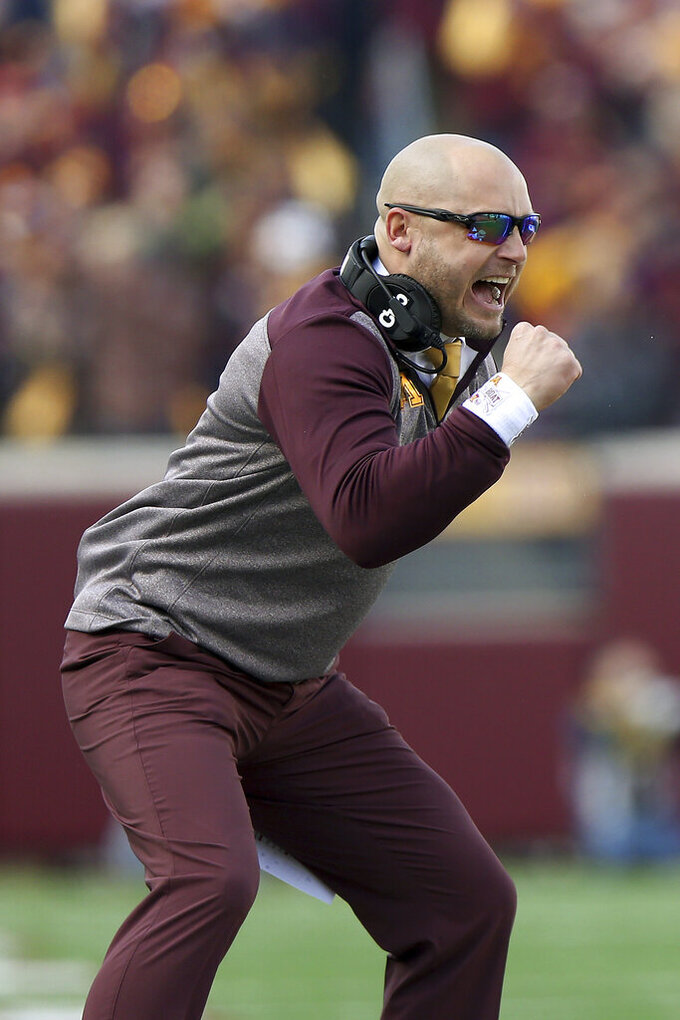 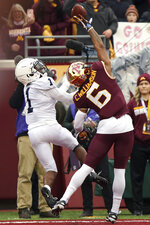 MINNEAPOLIS (AP) — The 12-point lead Minnesota held with less than four minutes left was down to a five-point cushion, when Penn State forced a three-and-out and regained possession with plenty of time to finish the rally.

Three consecutive completions later, the Nittany Lions were suddenly at the 11-yard line inside the 2-minute mark.

"I'm sure there's some people on the final drive who said, 'Oh, here we go again,'" Gophers coach P.J. Fleck said. "Got to let go of all that."

Well, an offensive pass interference penalty pushed Penn State back to the 25. The next throw by quarterback Sean Clifford sailed out of the reach of his intended receiver. Then he let another one fly for the end zone, an off-target ball that a sliding Jordan Howden intercepted to preserve a 31-26 victory for Minnesota on Saturday afternoon.

The Gophers ran out the clock, and the first sellout crowd at TCF Bank Stadium in four years poured out of the seats and swarmed them in celebration on the field to revel in the first 9-0 record for the program since 1904, when high schools and small colleges made up most of the schedule.

"It was just amazing to see the excitement on everybody's face, how together Minnesota is right now," defensive end Carter Coughlin said.

Finally, the Gophers won a big one.

"We've got to change at some point. I think this team's proven that, as we continue to go into the future, we don't have to keep saying things like that," Fleck said. "Does that mean you're going to win them all? No, it doesn't mean that. But they're doing a lot of special things that you can building on to make your culture stronger and your program stronger and make it more of a national brand."

Tanner Morgan completed 18 of his 20 passes for 339 yards and three touchdowns for the Gophers, who gained the most yards (460) and scored the most points (31) allowed by Penn State all season to establish a level of prominence unseen in the program for more than a half-century.

The last time they finished first in the Big Ten was 1967, a shared title with Indiana and Purdue. They were ranked seventh in the new Associated Press poll on Sunday, the first time in the top 10 since 1962. The season before that was the last time the Gophers went to the Rose Bowl.

Now after raising their conference record to 6-0, they're on a road that could actually lead to Pasadena. By winning the next two games at Iowa and at Northwestern, Minnesota would clinch a first West Division title and trip to the Big Ten title game without having to beat Wisconsin on Nov. 30. Ohio State is looming large, the team most likely to represent the East Division in Indianapolis on Dec. 7, but with the conference champion most certainly bound for the College Football Playoff, the Rose Bowl would be one heck of a consolation prize for the runner-up if only one Big Ten team makes the national final four.

Not that the Gophers are admitting to thinking about any of those scenarios.

"If you guys think that we're going to be riding this for a while, man, the second tomorrow comes, that's over with, and we're ready to roll," Coughlin said.

Forgive the Minnesota fans if they let the euphoria linger a little longer than that. They've had their hopes squashed so many times before, in the decades since their last conference crown.

There was the 16-0 victory at Memorial Stadium over top-ranked Michigan in 1977, the most recent win at home over a top-five team, that only got the Gophers a 7-5 finish. There was the win at sixth-ranked Ohio State in 2000 in mid-October that preceded a three-game losing streak. There was the 28-7 lead in the fourth quarter over Michigan in 2003, a matchup of two top-20 teams at the Metrodome that turned into a painful 38-35 loss. There were the defeats at Wisconsin in the last regular-season game of 2014 and 2016 after blown second-half leads, with the West Division title on the line.

Even all those postseason baseball losses by the Twins to the Yankees and NFC championship game meltdowns by the Vikings have factored into the shoe-is-sure-to-drop mentality of most Gophers backers, a product of both frustrating sports teams and the self-deprecating ethos of this state.

"I'm just here to be able to do everything I can with a staff and with a group of men every single day to provide a culture that everybody can be a part of," Fleck said. "Everybody can row the boat, and everybody can use that in their life, come back here, and we're one now, and we can create some type of dynasty."

Fleck went so far as to present the game ball in the locker room afterward to the entire state, asking the school president to give it to the governor.

"I'm from Kentucky, and I'm very proud to be from Kentucky," Morgan said, "but I love the state of Minnesota. I mean, I love it to death."