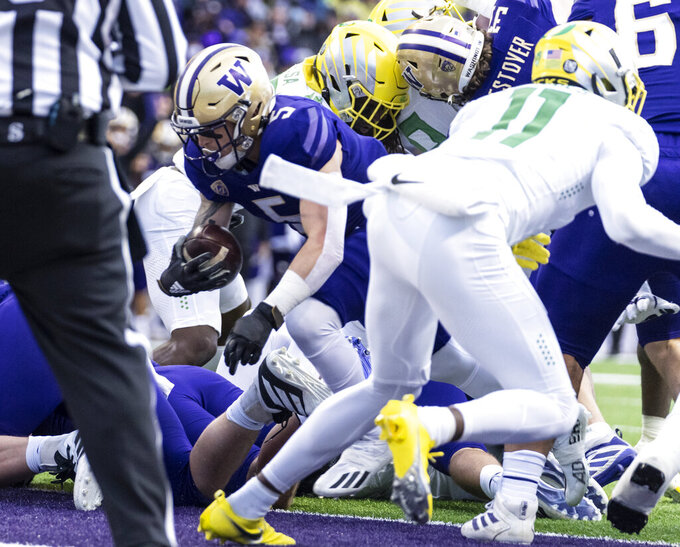 Washington running back Sean McGrew (5) scores a touchdown during the first half of an NCAA college football game against Oregon, Saturday, Nov. 6, 2021, in Seattle. (AP Photo/Stephen Brashear)

SEATTLE (AP) — By the time the final seconds ticked away, most of the purple had vacated, leaving Oregon to once again dance around the field and celebrate in the stands of arguably its most-heated rival.

On a windy, rainy night the seventh-ranked Ducks showed a bit more “prowess” — the word of the week in this rivalry — than Washington.

“Proud of the way our guys came out and showed our prowess in handling inclement weather," Oregon coach Mario Cristobal said. “We continued to play hard throughout the entire game making sure every critical situation our team responded really well.”

Travis Dye rushed for a career-high 211 yards and a touchdown, Anthony Brown ran for a score and passed for another and Oregon overcame a sluggish start to beat Washington 26-16 on Saturday night.

A year after the border rivals didn’t play due to a COVID-19 outbreak within the Huskies program, the Ducks (8-1, 5-1 Pac-12) fell behind early before running off 21 consecutive points and beat Washington for the seventh time in the past eight games played in Seattle.

“The ‘W’ means everything to me. The performance is just a plus," Dye said.

Brown threw a 31-yard TD pass to Devon Williams late in the first half to take a 10-9 lead at the break and scored on a 2-yard run early in the third quarter. Dye capped the scoring streak when he rumbled 19 yards for a score on the first play of the fourth quarter to give the Ducks a 24-9 lead.

Dye's rushing performance was the most yards rushing by an Oregon running back against Washington since Jonathan Stewart went for 251 yards in 2007.

Oregon had 215 yards rushing and averaged 6.9 yards per carry in the second half.

“When you can run the ball down somebody's throat, that's the best feeling in the world," Dye said. "When you have the confidence in your offensive linemen and running backs where you're just running it, it is the best feeling.”

Washington’s languishing offense that had done nothing all night suddenly went the length of the field and pulled to 24-16 with 11:13 remaining on Sean McGrew’s second TD run.

Oregon was able to grind nearly nine minutes off the clock even though they didn’t score. The drive was helped by a long run from Dye and Brown hitting Johnny Johnson III for 13 yards on a third-and-10. It was Johnson’s only catch after he was suspended for the first half following a targeting ejection last week.

Washington (4-5, 3-3) got the ball back with 2:14 left and 90 yards to go but had two dropped passes, an incompletion and when coach Jimmy Lake opted to punt the snap went over Race Porter’s head for a safety.

Lake said he opted to punt because Washington had two timeouts left and felt the Huskies could get the ball back with about 50 seconds left and better field position.

“We obviously weren't planning on a safety there with our punt operation,” Lake said.

Washington had won two straight on the road, but its offensive deficiencies led to several missed chances to create a cushion after taking a 9-3 lead.

Carson Bruener intercepted Brown's pass on Oregon’s opening drive and returned it 50 yards to the 7. In less than three minutes Washington had a 7-0 lead after McGrew scored on a 1-yard run and the Huskies added a safety shortly after for a 9-3 lead.

But Washington failed to extend the lead. Washington punted twice on fourth-and-short near midfield. Morris was intercepted in Oregon territory trying to force a pass into triple coverage. And McGrew was stopped on a fourth-and-1 run at the Oregon 23 late in the second quarter.

Washington: Some type of change needs to be made to Washington’s offense. They had no first downs in the first quarter, and went three-and-out six times. The conditions were awful, but the lack of potency and consistency from the offense has been a problem all year and has left the Huskies in the position of needing to win two of its last three games to become bowl eligible.