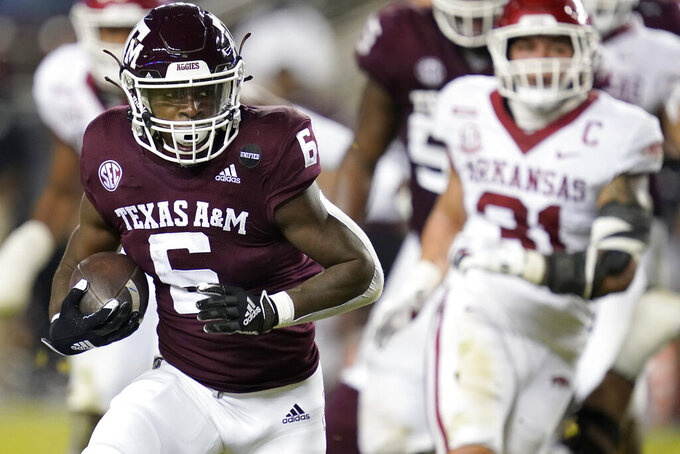 Texas A&M running back Devon Achane (6) rushes for a 30-yard touchdown run against Arkansas during the second half of an NCAA college football game, Saturday, Oct. 31, 2020, in College Station, Texas. (AP Photo/Sam Craft)

Texas A&M is looking to continue its surprising run to the top of the SEC. The Aggies have won three straight since their only loss to No. 2 Alabama and have looked more and more like a contending College Football Playoff team ever since. South Carolina is seeking its first-ever win over Texas A&M.

Texas A&M QB Kellen Mond vs. South Carolina's secondary. Mond has completed more than 60% of his throws for 954 yards, nine touchdowns and just two interceptions. The Gamecocks' defensive backs have been active this season with six interceptions. The last time they played at home, they picked off Auburn QB Bo Nix three times.

Texas A&M: LB Buddy Johnson has led the Aggies in tackles at nearly 11 per game. He's 10th nationally and the team's top tackler in each of the first five games.

South Carolina: RB Kevin Harris has added power and pop to the Gamecocks offense with 535 yards and eight touchdowns, second among runners in the SEC to Alabama's Najee Harris.

Texas A&M's Mond needs four TD passes to become the school's all-time leader in that category. He already broke Aggie career marks in passing yards and completions. ... South Carolina is seeking its second straight home win over a Top 25 opponent, something that hasn't happened since beating Clemson in 2011 and Georgia in 2012. ... Texas A&M hasn't allowed a sack in the past four games. ... South Carolina has led in time of possession in four of its first five games this season. ... The Aggies have scored on 13 of their last 14 times after reaching the red zone (opponents' 20). ... South Carolina is coming off a bye week that followed a 52-24 loss at defending national champion LSU. ... The Gamecocks are seeking multiple wins over SEC Western Division opponents for the first time since 2013.