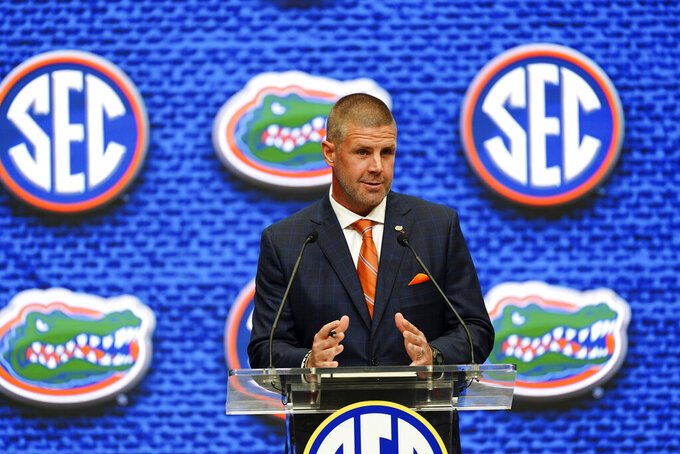 He experienced everything the Swamp has to offer during his three seasons in Gainesville. Now, he’s back – this time on the visiting sideline — for arguably the biggest non-conference game Florida has hosted in nearly a decade.

And when seventh-ranked Utah visits Florida Field on Saturday night for the first time since 1977 to open its most-anticipated season in school history, Diabate will have cautioned coaches, teammates and anyone who asks about what to expect.

“It’s one-of-a-kind,” he said. “I don’t think there’s any place I could compare it to. It’s an electric atmosphere.”

The Gators, 2 1/2-point underdogs according to FanDuel Sportsbook, are counting on it being a difference-maker, too.

Florida begins the Billy Napier era with the program’s toughest home opener in more than 50 years. Napier calls it a “carrot” for his players, but it also has the potential to be a catapult for a once-proud program clearly in rebuilding mode.

The Gators have lost 10 of their last 16 games, a skid that prompted athletic director Scott Stricklin to fire Dan Mullen in November. He hired Napier a few days later and tasked him with closing the gap on Southeastern Conference heavyweights Georgia and Alabama.

Napier has dynamic quarterback Anthony Richardson to build around, but it remains to be seen if he has enough talent to be anything more than mediocre in Year 1. Nonetheless, upsetting the defending Pac-12 champions at home would set a momentous tone for his tenure.

“This is not the same team as last year,” Florida defensive back Tre’Vez Johnson said. “This ain’t going to be nothing they’ve seen before, especially being in that Swamp. Ain’t nothing like 90,000. This is the best atmosphere in football, college football. It’s a night game, too.”

Napier has spent the last nine months putting his stamp on the program, which includes a new $85 million facility. But he’s also been mostly tight-lipped — he gets one shot at the element of surprise — about what to expect after kickoff.

There are no such secrets with Utah coach Kyle Whittingham, whose physical style has helped him win at least nine games in six of the last eight seasons. The Utes bring back 17 starters from last year’s team that lost to Ohio State in the Rose Bowl, including dual-threat quarterback Cam Rising, 1,100-yard, 21-touchdown rusher Tavion Thomas and quite possibly the best tight-end tandem (Brant Kuithe and Dalton Kincaid) in college football.

“A lot of guys returning always is a big help, in particular when you have an opener like we have this year,” Whittingham said. “This game has had their attention ever since we started in January, came back from the Rose Bowl and started school. It’s been certainly something they’re aware of and focused on.”

And seemingly prepared for. Whittingham had his team practicing indoors with the heat cranked up and music blaring throughout camp. How much will it help?

“I don’t think you can duplicate this,” Florida cornerback Jordan Young said. "This is different.”

Richardson's second career start will be his first at the Swamp. He had to ask about 30 teammates for tickets so he could get enough for friends and family.

“I had to scramble," said Richardson, who ended up with more than a dozen. "I wish I could invite more.”

Richardson started one game as a redshirt freshman last season — against eventual national champion Georgia. He looked mostly lost, turning the ball over twice before leaving with a concussion. He missed five games in all in 2021, but escaped camp unscathed.

“It’s always been a worry of mine,” he said. "But being able to go through camp with my teammates and coaches and staying healthy was a big deal for me.”

Florida hasn't lost a season opener at home since 1989, a 24-19 setback to Ole Miss. The Gators own the NCAA’s longest active winning streak in homes openers at 32. None of the previous victories came against ranked teams.

The last first-year Florida coach to lose his debut was Charley Pell in 1979.

Former Utah and Florida coach Urban Meyer had a shot at getting into the Gators' Ring of Honor on Saturday. Florida officials discussed Meyer, who led the team to national titles in 2006 and 2008, as a potential inductee last summer when he was coaching the NFL's Jacksonville Jaguars. They even invited him back for the 2021 season opener and introduced him to the crowd to gauge fan reception.

But the way Meyer's tenure ended in Jacksonville — he was fired for cause following months of missteps — put any ring plans temporarily on hold.