No. 8 Cowboys put perfect record on line against Iowa State 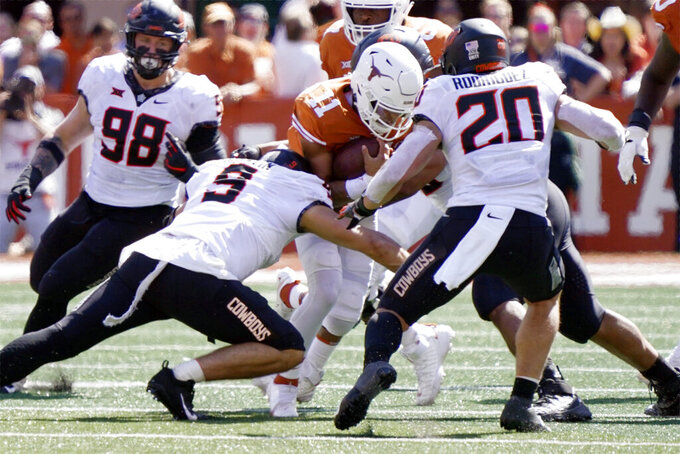 Oklahoma State is out to its best start since the 2015 team opened with 10 straight wins. The Cowboys enter the game off three straight wins over ranked opponents, and they've won four in a row in Ames. But this will be no breeze. The unranked Cyclones actually are favored, and they are following the Matt Campbell template of showing improvement as the season progresses.

Oklahoma State's defense vs. Iowa State's offensive line. The Cowboys lead the Big 12 with 19 sacks, Iowa State has given up a league-low six. Oklahoma State loves to blitz, and a total of 14 defenders have been in on at least one sack. Iowa State's line kept Brock Purdy clean against Kansas State, and he completed 22 of 25 passes for 208 yards.

Iowa State: RB Breece Hall ran for a career-high 197 yards against Kansas State and has been over 100 yards four straight games. The Cyclones need to get him going again to take some pressure off Purdy.

Oklahoma State RB Jaylen Warren has started the last four games and rushed for 218, 123, 125 and 193 yards. ... The Cowboys' three straight wins over ranked opponents are a school record. ... Four of OSU's six wins are by eight points or less. ... OSU has won eight of the last nine meetings with Iowa State. ... The Cyclones have won 13 of their last 14 Big 12 home games. ... Iowa State has outgained its opponent in nine straight games. ... Purdy is third nationally with a 73.9% completion rate and he's been over 80% three times this season.