No. 8 Tennessee looks to stay unbeaten at No. 25 LSU 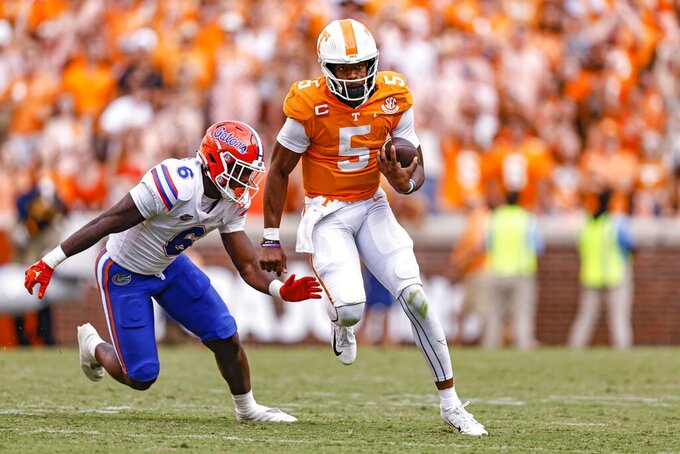 Line: Tennessee by 3, according to FanDuel Sportsbook.

Tennessee aims to improve to 5-0 for the first time since 2016. A Volunteers victory also would let them keep pace with SEC East favorite Georgia. LSU seeks to extend a four-game winning streak that has lifted the Tigers back into the Top 25. A loss in what appears to be LSU's toughest test yet likely would knock it out of the rankings. A victory would set new, higher expectations for how improved the Tigers could be in their first season under coach Brian Kelly.

Tennessee's prolific offense against LSU's formidable defensive front. Tennessee comes in averaging 559.3 yards total and 365.8 yards passing, both best in the nation. The Vols lead the SEC in six offensive categories and have scored at least 30 points in a league-high seven straight games. The Tigers' defense has allowed just 14.8 points per game and leads the SEC in forced turnovers with 12. LSU has 13 sacks and four interceptions.

Tennessee: : QB Hendon Hooker is coming off the best game of his career. He finished with 461 yards of total offense and three TDs in a 38-33 win over Florida. Hooker was 22 of 28 for 349 yards and two TDs without top wide receiver Cedric Tillman. It was the most yards passing by a Vols QB against Florida since Peyton Manning threw for 353 in 1997. Hooker also ran 13 times for 112 yards and a TD.

LSU: DE B.J. Ojulari has a team-leading 3 1/2 sacks and 4 1/2 tackles for loss. He's twice been named the conference defensive lineman of the week.

Although Tennessee leads the all-time series, LSU has won the past five meetings, with the last three games at Tiger Stadium coming down to the final play. ... The Vols' last victory against the Tigers came in 2005 in overtime in a game at Tiger Stadium that had been postponed for two days by Hurricane Rita. ... This trip to Baton Rouge is Tennessee's first since 2010 ... This will be the first time these teams have ever kicked off before noon local time. ... Tennessee did not play last weekend and coach Josh Heupel is 6-1 in games after an open date as a head coach, including 5-1 at UCF. ... LSU has won its past four games at home and 13 of 14 in against SEC East teams in Death Valley. ... LSU QB Jayden Daniels is expected back in the lineup after leaving the second half of last week's victory at Auburn with knee soreness. ... LSU has allowed just three second-half points in the past three games.