No. 9 Irish opener at Florida State like 2019 at Louisville 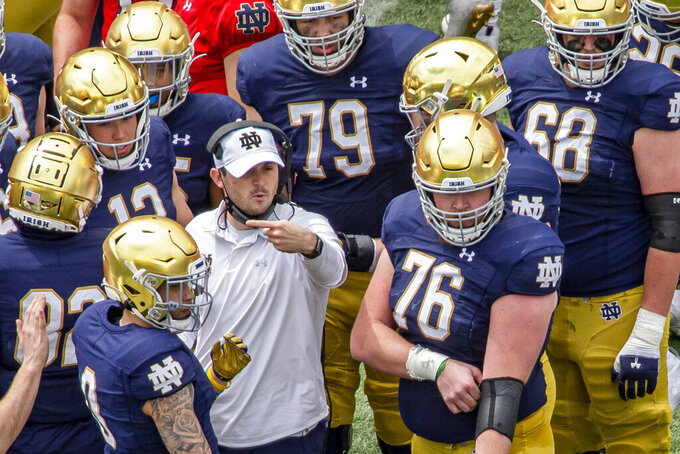 FILE - In this May 1, 2021, file photo, Notre Dame offensive coordinator Tommy Rees talks with players during a timeout in the Blue-Gold NCAA spring football game in South Bend, Ind. The 2021 challenge for Rees is to improve considerably from last season’s scoring output of 33.4 points per game. (AP Photo/Robert Franklin, File)

It was on Sept. 2, 2019 – Labor Day night – that Kelly’s Fighting Irish, also ranked No. 9 in the preseason and rebuilding after their College Football Playoff 30-3 semifinal loss to Clemson, didn’t know what to expect when they opened at Louisville against first-year coach Scott Satterfield’s Cardinals.

“That was a group similar to this,” Kelly said Monday about his 2021 team, which will open on the road against second-year coach Mike Norvell’s Seminoles, who finished 3-6 in 2020. One of those losses was a 42-26 setback to Notre Dame in South Bend.

“There was a mix of some veterans and some young players (at Louisville),” Kelly said. “We were trying to handle the environment and figure that out as well as execute at a higher level. We didn’t tackle very well, if you remember, in the first half. We played much better defense (in the second half) and then kind of settled in on offense and that changed the flow of the game.”

Missing for the Irish will be junior linebacker Marist Liufau, who had season-ending surgery Monday on a dislocated right ankle. His place will be taken by junior JD Bertrand.

Last October, the Seminoles took a 17-14 first-quarter lead in Notre Dame Stadium behind quarterback Jordan Travis, who accounted for 300 total yards and two touchdowns. But the Irish rallied for three touchdowns in a 21-0 second quarter and held off Florida State in the second half.

Travis is back but was being pushed by UCF transfer McKenzie Milton, one of several grad transfers Norvell’s team added this season. Another is familiar to Notre Dame: starting left guard Dillan Gibbons transferred after Notre Dame spring practice and earning his degree.

“We wish Dillan the best — he was a hard-working guy for us,” Kelly said. “But once they kick it off, it’s all about Notre Dame.”