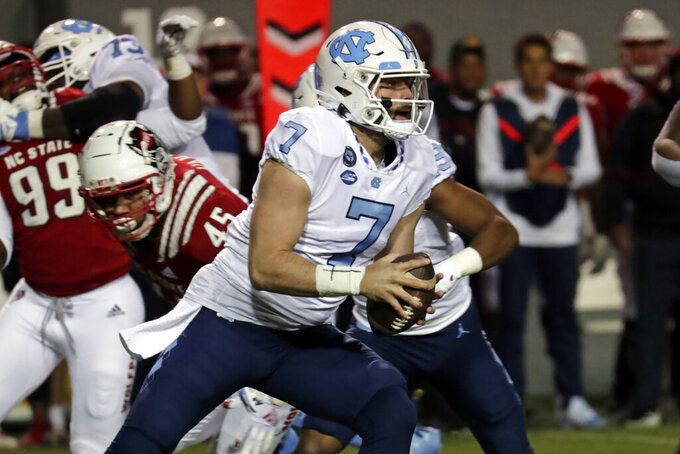 FILE - North Carolina quarterback Sam Howell (7) rolls out while being chased by North Carolina State defensive tackle Davin Vann (45) during the first half of an NCAA college football game Friday, Nov. 26, 2021, in Raleigh, N.C. The junior quarterback started his career at North Carolina in 2019 by leading the Tar Heels to a win over South Carolina at Bank of America Stadium in the season opener. Now the projected first round NFL draft pick will look to close out his career with a victory over Gamecocks at the same stadium in the Duke's Mayo Bowl. (AP Photo/Chris Seward, File)

North Carolina's junior quarterback started his college career by leading the Tar Heels to a come-from-behind victory over South Carolina in the 2019 season opener at Bank of America Stadium. Now, nearly 28 months later, the projected first round NFL draft pick will look to close out things out with a victory over those same Gamecocks at the same stadium in the Duke’s Mayo Bowl in what is expected to be his final game before turning pro.

“To kind of relive that moment and get that same opportunity is going to be kind of fun,” said Howell, who grew up in Charlotte.

While the Tar Heels’ season overall has been a disappointment — they started the season ranked 10th in the country but finished 6-6 and outside of the Top 25 — Howell has managed to put up some strong numbers despite playing behind a porous offensive line.

While many of the top college players around the country are opting out of playing in bowl games, Howell said that was never a consideration for him — even though outlets have him projected as a top 10 pick.

“Everyone who knows me, they know I was going to play,” Howell said.

South Carolina coach Shane Beamer said Howell presents a big challenge for his defense because of his versatility.

“He's a great passer but I didn't realize what a great runner he is," Beamer said. "It's amazing just how many tackles he's broken this season.”

Some other things to watch on Thursday in the Duke's Mayo Bowl:

The Duke’s Mayo Bowl features one of the most anticipated celebrations of the college bowl season with both coaches agreeing to get a mayonnaise bath — instead of the traditional Gatorade bath — if their team wins. Both coaches are relishing, so to speak, being part of the event that would net their charity of choice $10,000.

“It's not that I'm dying to have mayonnaise dumped on me, but if it means we won the football game then I'm all for it,” Beamer said with a laugh. “I did find out it won't just happen naturally on the field, and that it will be an organized dumping — which makes you a little more nervous about it because of the anticipation of knowing it's coming.”

With so many bowl games being canceled due to COVID-19, both coaches have been on a little on edge this week — not wanting to have to tell players this game has been called off.

Beamer said South Carolina had a “few” positive test on Tuesday, but nothing that will prevent the Gamecocks from playing.

North Carolina coach Mack Brown said the Tar Heels are in “great shape” when it comes to COVID-19 with “minimal to none” positive tests. He said his players will not need to be tested again before the game.

“It’s a disappointing deal,” Beamer said. “We had one senior walk-on who had to go home. And he feels great. Zero symptoms and just like that his college career ends.”

Zeb Noland's storybook season will get a final chapter.

Noland, who began the season as a graduate assistant coach for South Carolina coach Shane Beamer, will return to the starting quarterback spot after Jason Brown entered the transfer portal.

Beamer turned to Noland, who had one year of eligibility remaining after his playing career at Iowa State, when injuries decimated the team's quarterback position. Noland helped the Gamecocks to wins over Eastern Illinois and East Carolina and threw a winning touchdown pass with 37 seconds left to beat Vanderbilt.

“He's going to be a great coach going forward,” Beamer said of Noland.

After losing running backs Javonte Williams and Michael Carter to the NFL last season, it was expected that North Carolina's running game would take a huge hit.

But after a slow start to the season, Ty Chandler came on strong and ran for 1,063 yards. Along with Howell, North Carolina finished first in the conference in rushing. They'll face a South Carolina defense that has allowed at least 190 yards rushing in four of its past five games.

South Carolina, however, doesn't have a dominant pass rush and will be without its top pass rusher, defensive end Kingsley Enagbare, who has opted out of the game to prepare for the NFL draft. Enagbare finished the regular season with team-high 4 1/2 sacks and had seven tackles for a loss.