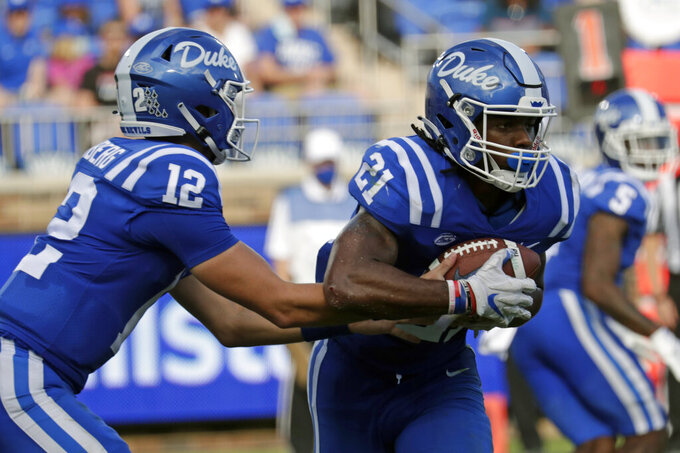 Duke quarterback Gunnar Holmberg (12) hands off to running back Mataeo Durant (21) during the first half of an NCAA college football game against Northwestern in Durham, N.C., Saturday, Sept. 18, 2021. (AP Photo/Chris Seward)

North Carolina’s potential-filled season has turned into one of frustration. The Tar Heels’ next chance to correct that wrong course comes Saturday in a visit from longtime nearby rival Duke.

They started the season with a top-10 ranking for the first time in nearly a quarter-century and as the favorite to win the Atlantic Coast Conference’s Coastal Division race. An opening-night loss at Virginia Tech drained some buzz but was passed off as a learning experience for a team still shoring up replacements for departed NFL talent.

A second ugly road loss, this one at Georgia Tech last weekend, has left Mack Brown’s coaching staff to sort out bigger concerns for the now-unranked Tar Heels (2-2, 1-2 ACC).

“Let’s quit worrying about last year’s offense, and let’s figure about this year’s offense,” Brown said. “Let’s get better on defense. We’re more talented than to be middle of the league on defense and not getting turnovers. So let’s grow up and let’s pull together, and let’s play together.

The Blue Devils (3-1) had their own opening-night stumble at Charlotte but have won three straight since, including against Northwestern and Kansas. They’ve been powered by running back Mataeo Durant’s now-routine big performances, though the offense overall has been one of the Bowl Subdivision’s best in quarterback Gunnar Holmberg’s first year as the starter.

“We’re playing an extremely talented team, the most talented team that we’ve seen to this point – probably in a big way,” Blue Devils coach David Cutcliffe said. “So if you’re not sound in every aspect, if you’re not doing the little things well, they will exploit it with that kind of talent.”

Some other things to know about Saturday’s Duke-UNC game:

Durant has been terrific from the season’s first snaps.

The senior ran for a program-record 255 yards in the Charlotte loss and also had 100-yard efforts against the Wildcats and the Jayhawks. He ranks third in the FBS ranks by averaging 130.5 yards rushing and he’s tied with Fresno State’s Jalen Cropper second in total touchdowns with nine, one behind Marshall’s Rasheen Ali.

“I think he’s a really complete football player,” UNC defensive coordinator Jay Bateman said. “He catches it, blocks, he’s a very physical runner. … I think when he gets his shoulders square, he’s a very hard guy to tackle.”

Expect plenty of yards and points in this one. Duke is ranked eighth in the FBS in total offense (544.5 yards per game) and tied for 20th in scoring (38.8 points).

“This offseason, especially during camp, we’ve preached just being explosive,” Blue Devils receiver Jake Bobo said. “Being constantly explosive, and that’s definitely something I think we’ve done so far through the first four.”

The Tar Heels’ struggles in losses with a veteran offensive line have been glaring.

The Hokies sacked star quarterback Sam Howell six times in the season opener, taking the Tar Heels' offense off schedule as the line dealt with some lingering preseason injury concerns and communication problems. The Tar Heels appeared to have corrected some issues with its 59-point outburst against Virginia (one sack allowed), only to give up eight sacks to the Yellow Jackets.

“We’re all a little (ticked) off, like we know as a unit we can do better,” offensive lineman Jordan Tucker said.

The Tar Heels have won the past two meetings, with Brown – in his second stint after first leading the Tar Heels from 1988-97 – has won his last 10 meetings against the Blue Devils.

The winner of the annual rivalry game claims possession of the “Victory Bell” for a year. It is a cart with a bell from an old railroad train, created for the 1948 edition of the rivalry. The winner typically paints the cart in its preferred shade of blue.