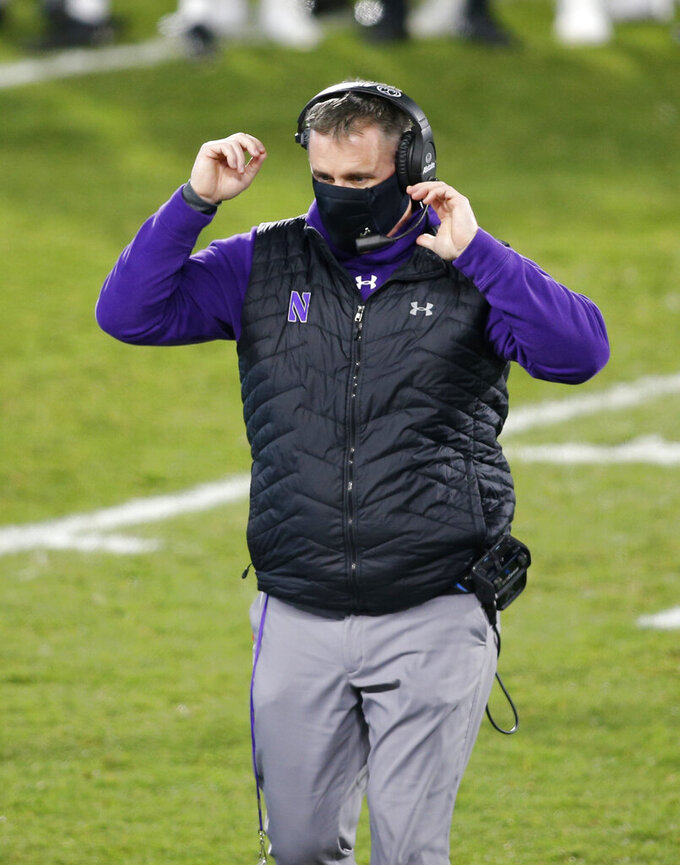 CHICAGO (AP) — Pat Fitzgerald had barbecue for lunch, then went home and watched college football with his wife.

It sure was a different way to celebrate for No. 15 Northwestern after clinching the Big Ten West for the second time in three years.

The Wildcats host Illinois in the regular-season finale on Saturday and will then turn their attention to the conference championship game against No. 3 Ohio State in Indianapolis on Dec. 19.

For a team that went from winning the division in 2018 to finishing at the bottom, it's quite a turnaround. With an unexpected bye after Minnesota canceled last week because of a COVID-19 outbreak within its program, Northwestern (5-1, all Big Ten, No. 14 CFP) didn't get a chance to celebrate following a win the way it did after a clinching victory two years ago at Iowa.

Instead, the Wildcats had a walkthrough Saturday and were presented the division trophy.

Northwestern didn't even win a league game last year until a victory over Illinois in the finale. The Wildcats finished 3-9 overall and 1-8 in conference play, a steep drop after going 9-5 in all and 8-1 in the conference.

But here they are, back on top of the division.

The Buckeyes are in the title game after Big Ten administrators and athletic directors called an audible and voted to drop the six-game requirement to be eligible.

But for Northwestern, there is a more immediate task at hand. The Wildcats hope to get back to winning when they meet Illinois (2-4) after losing at Michigan State two weeks ago.

The Illini, meanwhile, look to close on a positive note. They scored the first 14 points against Iowa last week, only to give up the next 35 on the way to a 35-21 loss.

Northwestern is 5-1 in conference play for the third time since 2000. That team won five of its first six en route to a 6-2 league mark and a Big Ten co-championship. And in 2018, the Wildcats' only regular-season conference loss was to Michigan early on. They got blown out by Ohio State in the league title game.

Coach Lovie Smith wouldn't say if Brandon Peters or Isaiah Williams will get the nod at quarterback for Illinois. Peters has started the past two games after missing three because of a positive COVID-19 test. He completed his first eight passes while throwing for two touchdowns against Iowa, only to finish the game 10 of 18 with 116 yards. Williams replaced him in the fourth quarter.

“We know what we’re going to do at the quarterback position,” Smith said. “No, we’re not going to talk about it right now, like no one else does. Can’t wait to put that on display this Saturday up in Evanston.”

Smith loves to “get off the bus running.” To that end, the Illini lead the Big Ten in total yards rushing (1,261) and rank second to Ohio State in yards per game (210.2) and carry (5.0). But they'll be tested by one of the league's stingiest defenses. Northwestern allows 3.7 yards per run.

When it comes to scoring against Northwestern, opponents need to get their points early. The Wildcats have a 61-22 edge in the second half. And in four of the six games, they did not allow a point over the final two quarters.

Northwestern has outscored Illinois 161-68 while winning their past five meetings — the Wildcats’ best streak in a series dating to 1892. Their longest win streaks against Big Ten opponents were seven straight over Indiana from 1959-65 and six in a row versus Wisconsin from 1929-37