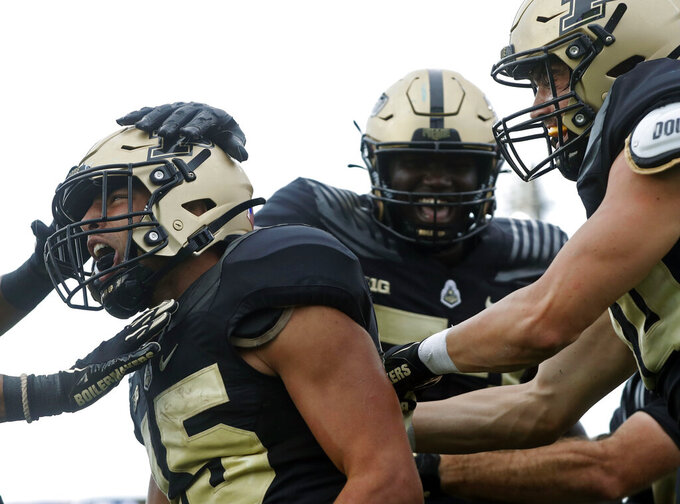 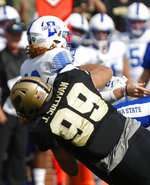 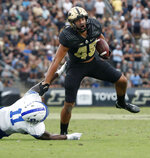 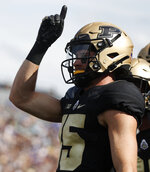 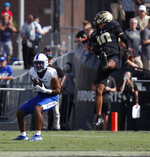 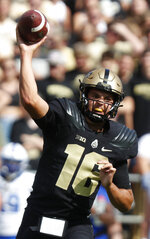 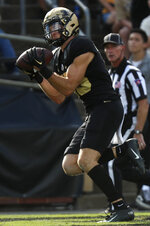 The childhood friends hooked up for three first-half touchdowns in their second college game together, and then watched the rest of the Boilermakers' 56-0 victory over Indiana State on Saturday.

Jones caught nine passes for 133 yards in his second straight 100-yard game since transferring to Purdue from Iowa. O’Connell went 17 of 19 for 211 yards and four scores while moving past Scott Campbell and into sixth on the school list for passing TDs. The first walk-on to earn Purdue’s starting quarterback job now has 48 TD passes.

The combination of O’Connell and Jones has looked virtually unstoppable so far, connecting 21 times for 286 yards and four scores this season.

“I came here, obviously, for the offense and I like what I’m seeing so far,” said Jones, who has already matched last season's reception total. “Definitely, it was a good move.”

Cam Allen recovered a fumble on the game's first snap and four plays later King Doerue scored on a 4-yard TD run. Jones stiff-armed a defender on his way to a 7-yard TD catch and O'Connell found Paul Piferi for a 26-yard score on the next two series. O'Connell closed out the half with TD passes of 36 and 5 yards to Jones to make it 35-0.

“We had three turnovers and you can’t turn the ball over like we did today and expect to win,” Sycamores coach Curt Mallory said. “We weren’t able to stop the run and we weren’t able to run.”

Purdue coach Jeff Brohm pulled O’Connell, Doerue and Jones at the start of the second half. The Boilermakers tacked on two more touchdowns in the third quarter and another in the fourth.

“We needed to come out there and take care of business,” Brohm said. “And we did that.”

Indiana State: This was no surprise. Indiana State is 0-18 all-time against current Big Ten members. Dante Hendrix had an impressive season debut with five receptions for 90 yards. Now the Sycamores must prepare for the traditional Missouri Valley Football Conference gauntlet.

Purdue: O'Connell and Jones helped the Boilermakers bounce back after a demoralizing loss to Penn State in the season opener. The 56-point margin was the largest in Brohm's six-year tenure and it was also the second shutout in his Purdue career. The Boilermakers beat UConn 49-0 last year. Now Purdue can build some momentum for the resumption of conference play in three weeks.

First, Allen recovered the fumble. Then he zig-zagged across the field in the third quarter for a 65-yard interception return that made it 49-0.

Purdue now has two TDs off interceptions in two weeks. Chris Jefferson scored on a 72-yard interception in the season-opening loss to Penn State.

Brohm announced playmaking safety-linebacker Jalen Graham would miss an “extended” amount of time with an undisclosed injury after they got MRI results back Friday. Brohm also said he expects receiver Broc Thompson to miss some time with a knee injury.

Purdue held a pregame moment of silence in memory of the three Indiana State students who were killed in a fiery car crash Aug. 21.

First-year football players Caleb VanHooser and Christian Eubanks died. Two other football players, John Moore and Omarion Dixon, were seriously injured in the crash but were released from the hospital this week. Dixon was a high school star at nearby Lafayette Harrison.

The Sycamores also had a moment of silence before last week’s home opener, but Mallory and three of the team captains thanked Purdue for its gesture earlier this week.

Indiana State: Returns home to take on Montana next Saturday.

Purdue: Makes its first road trip next weekend at Syracuse. ___