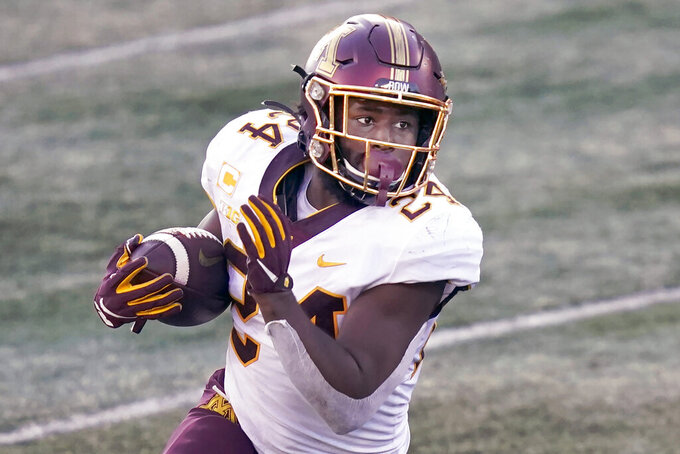 FILE - Minnesota running back Mohamed Ibrahim carries the ball during the first half of an NCAA college football game against Illinois in Champaign, Ill., in this Saturday, Nov. 7, 2020, file photo. There will be no easing into the season for most Big Ten teams. Ibrahim said he and his teammates are juiced up playing the team that's won four straight Big Ten titles and played in the national championship game in January. (AP Photo/Charles Rex Arbogast, File)

For the fourth-ranked Buckeyes, this turnover — from NFL first-round draft pick Justin Fields to C.J. Stroud — could be as unsubtle as anywhere in the country. Stroud has yet to attempt a college pass, a scenario the program has not experienced since 1952.

His teammates, however, saw all they needed to see over the last month in practice from the 6-foot-3, 215-pound second-year freshman.

“We’re just very excited for us to have him as our quarterback right now," left tackle Nicholas Petit-Frere said. "He’s taken that job in full stride.”

With a quality, experienced Big Ten opponent waiting in Minnesota for Thursday night's opener, not to mention 11th-ranked Oregon due for a visit on Sept. 11, Ohio State has no room to ease into the schedule. Coach Ryan Day recognized that by ramping up the intensity of preseason camp, a grind toughened further on some days by driving rain or sweltering heat.

“There are certain guys that rise to the cream of the crop and come through in those big moments and kind of inspire the team to keep pushing forward even in hard moments," Petit-Frere said. "C.J. did that almost every single time.”

Stroud, a consensus five-star recruit out of Southern California, wasn't the starter until his junior year at Rancho Cucamonga High School. He appeared in three games last season of late-game relief for Fields, who was the 11th overall pick this spring by the Chicago Bears after a stellar two-year stay with the Buckeyes.

Alabama, Clemson, Notre Dame and Texas A&M — holding five of the top nine spots along with Ohio State in the first Associated Press poll — are also breaking in a new quarterback. Stroud's debut comes against a Gophers team that returns about 90% of its primary starting lineup from 2020.

Minnesota also still has several key members of the 2019 squad that went 11-2 and was 10th in the final AP rankings, so this will be a legitimate first test for Stroud as he takes over the offense for the four-time defending Big Ten champions.

The Gophers, who went just 3-4 in 2020 while enduring scores of absences for COVID-19 protocols and major growing pains on defense, last beat Ohio State in 2000 when many of their players were not yet born. Those that were alive then as infants and toddlers have given Minnesota one of the most experienced teams in college football.

Running back Mo Ibrahim and quarterback Tanner Morgan will play behind an offensive line filled with super seniors, and Ibrahim and Morgan and Ibrahim are fifth-year players themselves.

“Guys are coming back for something bigger than themselves," said coach P.J. Fleck, who’s starting his fifth season. “When they're doing that, I think that’s a good sign of things to come.”

“He makes you feel small," tight end Jeremy Ruckert said, "but you feel safe next to him.”

Ibrahim was also a second team preseason AP All-American, a punishing ball carrier who's poised to become the just the fourth 4,000-yard rusher in program history. He has 2,840 yards in 28 career games and is currently in ninth place on the all-time Gophers list.

“We definitely can’t have any arm tackles,” Ohio State linebacker Teradja Mitchell said. “We’ve got to wrap him up.”

Stroud will have the benefit of throwing to wide receivers Chris Olave (first team) and Garrett Wilson (second team), both preseason All-Americans and widely considered the best tandem in the country. Fleck called them the best duo he's ever seen or scouted.

The Gophers added three transfers to their specialist group, including new kicker Matthew Trickett, a native of Cleveland who spent three seasons at Kent State. Trickett won the job over Brock Walker, one of four players who took turns on the job last year, and Temple transfer Wil Mobley.

The Buckeyes have not yet revealed their kicker. Jake Seibert, who was 16 for 16 on extra points and 1 for 2 on field goals in 2020, has been competing with North Carolina transfer Noah Ruggles.

Day on the excitement of finally seeing the team's strengths and weaknesses unfold on the field: “That’s the fun part about coaching. The hard part is you’re not allowed to lose around here."