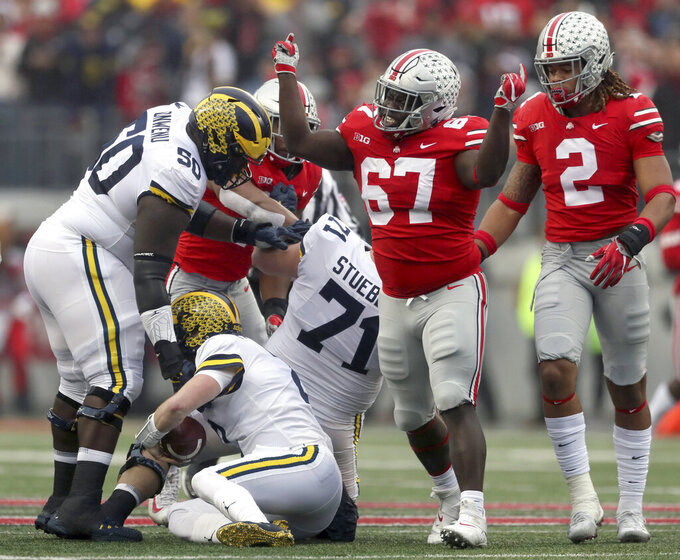 In this Saturday, Nov. 24, 2018, photo, Ohio State defensive lineman Robert Landers (67) celebrates his sack on Michigan quarterback Shea Patterson (2) in the first half of an NCAA college football game in Columbus, Ohio. Robert Landers struggles with mental illness, and he doesn’t care who knows it. In fact, he wants more people to know it. He took to Twitter in the aftermath of the mass shooting in his hometown of Dayton to make his struggle public, understanding that survivors of the shooting and others may have issues to contend with. (Marvin Fong/The Plain Dealer via AP)

In fact, he wants more people to be aware of it. The mass shooting in his hometown of Dayton, Ohio, rattled him enough that he decided it was time to speak out.

The gregarious senior known as "BB" said he has suffered bouts of anxiety and depression since his father was shot to death and he was forced to become the man of the house at age 10. It wasn't until he got to Ohio State that he was mature enough to recognize what was happening and to stop regarding it as a weakness.

"God has continued to bless me and put me in certain positions, but it's still an uphill battle on a day-to-day basis," Landers said in a video he tweeted after the Dayton shootings. The video , in which he also offers condolences to the victims' families, has been viewed more than 130,000 times.

For the 22-year-old Landers, the shooting came close to home.

His brother Trey, a University of Dayton basketball player, and three of their cousins were in an Oregon District bar in the early morning hours of Aug. 3 when the shooting started right outside. Ten people were killed, including the shooter, and 27 were injured, though Landers' family members were unhurt.

Given his own past, Landers said he understands survivors and others may have mental health issues to contend with in the aftermath.

It's not typical for a 6-foot-1, 285-pound battering ram of a nose tackle to talk about his innermost feelings, fears and weaknesses. That's exactly the point. He hopes airing his struggles will take away some of the stigma and more people who need it will seek help.

"I felt like it was a good time to use my platform and just speak out about it and express how I felt about and pay my condolences to those people," Landers said.

Landers' revelations come at a time that major college football programs have been forced to recognize and confront mental health issues, including how college athletes are holding up under the strain of a challenging academic workload, the pressure of expectations and living public lives via social media.

His coach, Ryan Day, feels so strongly about the issue that he and his wife sponsor a charity for pediatric and adolescent mental wellness at Nationwide Children's Hospital in Columbus. It's personal for Day, too, who was 9 when his own father killed himself.

Day said Ohio State also has added to its counseling staff this year for players who need someone to talk to.

Brain injury issues and the suicides of college football players in recent years have forced the issue more out into the open in general.

More schools are now being proactive about watching players closely and trying to help. For instance, the Pac-12 has committed around $3.5 million per year in research grants for projects to improve the health, general well-being, and safety of student-athletes.

"I said this 10 years ago in a meeting one time in the ACC, and people said, well, they kind of laughed," Texas A&M coach Jimbo Fisher said.

"I said, listen, guys, mental health is a huge part of what's going on right now," he said. "When you're 18, 20 years old, the kids — the things they're facing is a hundred times greater than we ever did when we were coming up because of (the media) and the social media and the accessibility and the expectations. It's crazy what these kids go through, and it's a shame sometimes."

Florida coach Dan Mullen noted that fans who watch their heroes on Saturday don't think about what's happening in their lives the rest of the week.

"A lot of guys, it's the first time ever being away from home," Mullen said. "You're growing and finding out about yourself, and a lot of these guys are having to do it under a spotlight with a lot of people watching them and critiquing everything they do."

Minnesota coach P.J. Fleck meets with non-football staffers, including mental health specialists, every Monday for feedback on his players.

For Ohio State's Landers, the grind of football practice with his teammates serves as a release, a chance to put aside all the pressures and the dark thoughts that sneak in sometimes.

"The best way I've learned to deal with this issue and this disease," he said, "is surrounding myself with the best possible people I could surround myself (with)."