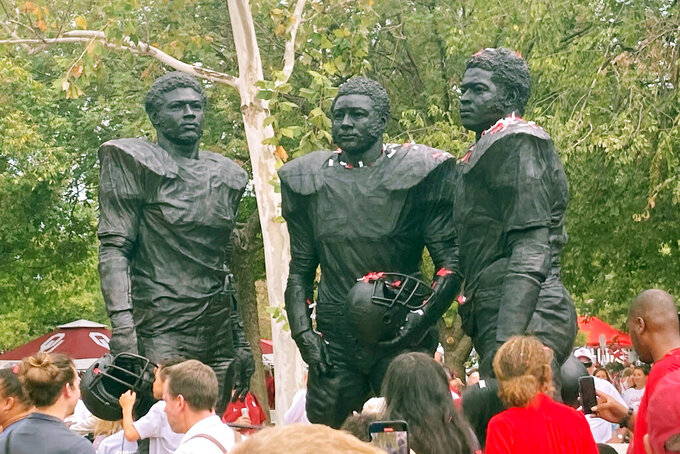 The University of Oklahoma dedicated a statue honoring the Selmon brothers — defensive linemen Lucious, Dewey and Lee Roy — on Saturday, Sept. 24, 2022, in Norman, Okla. The trio starred for Oklahoma from 1971 to 1975 and helped the Sooners compile a 54-3-1 record with national championships in 1974 and 1975 and four Big Eight titles. (AP Photo/Cliff Brunt)

The trio starred for Oklahoma from 1971 to 1975 and helped the Sooners compile a 54-3-1 record with national championships in 1974 and 1975 and four Big Eight titles. The brothers combined for 96 career starts, 915 tackles, 96 tackles for loss and 16 fumble recoveries at Oklahoma. All three started together in 1973.

Lucious and Dewey were present at a ceremony near Memorial Stadium; Lee Roy died in 2011. Family members helped pull the cover off the statue.

It's the first statue of defensive players on the campus. The Heisman Park across the street from the stadium has statues of Billy Vessels, Steve Owens, Billy Sims, Jason White, Sam Bradford and Baker Mayfield — all offensive players.

The Tampa Bay Buccaneers made Lee Roy the No. 1 overall pick in the 1976 NFL Draft and was the 1979 NFL Defensive Player of the Year. He was inducted into the College Football Hall of Fame in 1988 and the NFL Hall of Fame in 1995. Tampa Bay made Dewey the first pick in the second round in 1976, and he was a second-team AP All-Pro at outside linebacker in 1979.