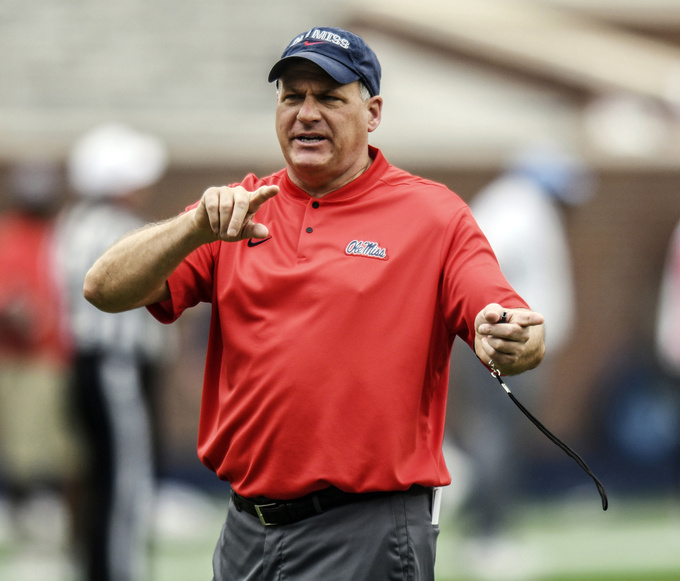 MEMPHIS, Tenn. (AP) — The rivalry between Mississippi and Memphis dates back almost 100 years, often an early-season test with the Rebels piling up plenty of victories.

These teams meet Saturday in the season opener for what could be the last game between them.

And for a change, Memphis is favored against the Rebels of the Southeastern Conference.

"Any time that you are playing a quality opponent in your first week, I think your antenna goes up in regards to the sense of urgency that you prepare with," Ole Miss coach Matt Luke said of being the underdog.

Ole Miss is busy trying to claw its way back up the Southeastern Conference after finishing 2018 at 5-7 and a meager 1-7 in conference play.

Luke enters his third season with some optimism thanks to returning 11 starters, including eight on defense. That includes Scottie Phillips, last year's leading rusher with 928 yards, and Matt Corral completed 16 of 22 passes with a pair of touchdown tosses in four games last season to preserve his redshirt status.

Memphis has gone to four straight bowl games out of the American Athletic Conference, and the Tigers went 8-6 last season. Coach Mike Norvell also has quarterback Brady White back to oversee an explosive offense after throwing for 3,296 yards and 26 touchdowns last season. Norvell would like to see this series continue past Saturday.

"I think these regional games — whether it's Ole Miss, Arkansas, Mississippi State, Missouri — those are all games we'd love to play in," Norvell said. "It brings our fan base to a new level of excitement."

Some other things to know about the final game scheduled between these teams:

Leading rusher Darrell Henderson and all-purpose player Tony Pollard now are in the NFL with Henderson with the Rams and Pollard in Dallas. Memphis has Patrick Taylor, who like Henderson rushed for more than 1,000 yards, as the new starting running back to work with White.

"The biggest challenge is watching Marshall and picturing Memphis players in that scheme," Luke said of the Memphis' defense. "But they are having to do that same thing for us as well."

The banter between the teams began weeks ago. Ole Miss defensive back Jaylon Jones called the game "a little rivalry," then provided more bulletin board material saying "I kind of get that they're like the little brothers to us."

Ole Miss' confidence stems from leading this series 47-11-2, and that doesn't include a pair of recent victories vacated due to NCAA rulings. Ole Miss dominated the series early with Memphis losing every game until a 0-0 tie in 1963. The Tigers' first win in the series didn't come until 1967.

Memphis benefited from a morning kickoff the last time these teams played here in 2015. The Rebels entered as a 10-point favorite and ranked No. 13 only to lose 37-24 to the Tigers.