By opting out of video game, ND calls attention to NIL issue 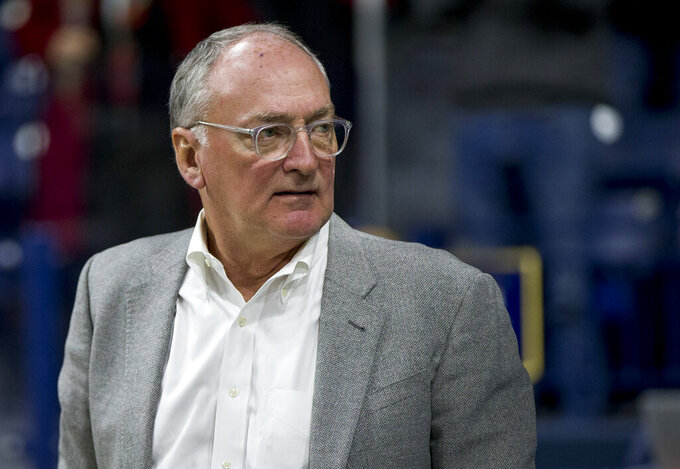 fILE - In this Nov. 13, 2017, file photo, Notre Dame athletic director Jack Swarbrick attends an NCAA college basketball game between Notre Dame and Mount St. Mary's in South Bend, Ind. Swarbrick tells The Associated Press the school went public with its decision to not be included in EA Sports' new college football video game because the NCAA's proposed rule changes would prevent the names, images and likeness of players from being used in the game. (AP Photo/Robert Franklin, File)

The NCAA's proposal to permit athletes to earn money from endorsements would stand in the way of players' names, images and likenesses being used in EA Sports' new college football video game.

Until that changes, Notre Dame doesn't want to be in the game. The Fighting Irish are not alone among major college football programs passing on inclusion in the rebooted game until players can get paid to be in it, too.

Notre Dame athletic director Jack Swarbrick told The Associated Press on Monday that the school went public last week with its decision not to be included in the game to call attention to a major issue that has not been thoroughly addressed as the NCAA tries to reform NIL rules: group licensing.

“I’m certain we’ll head into August with name, image and likeness in some form,” Swarbrick told AP. “Among my concerns is that the group licensing dynamic is just not getting the consideration it needs. It’s really complex.”

EA Sports announced last month it was relaunching its new college football series, eight years after the popular NCAA Football game was discontinued. The NCAA was sued by former college athletes for inappropriately using their images and likenesses in the video games and lost.

Notre Dame became the first school to publicly state it would not be part of the new game unless athletes could be compensated for it.

The game is about two years away from being available to consumers, but EA is in the process of acquiring the rights to logos and marks of each school. Swarbrick said that led to the timing of Notre Dame's decision.

Since Notre Dame went public with its choice, Northwestern did the same in response to a question from the Chicago Sun-Times. Tulane issued a social media post similar to Notre Dame's saying it would not participate.

“It's not like the entire country gasps that they cannot be Tulane in the video game,” Dannen said. “This is about aligning and maybe putting the student-athletes' interest before anyone else's.”

Swarbrick said coming out in favor of clearing the way for players to be compensated for their participation in the video game was not about trying to rally support for that position.

“I wasn’t trying to encourage other schools to make any decision one way or another relative to EA,” Swarbrick said.

The NCAA's NIL proposal tries to create separation between the schools and athletes. Athletes would be permitted to make money from sponsorship deals, personal appearances or for being an online influencer, but those deals would not involve the schools. Athletes would not be allowed to use school logos or marks.

That means under the current proposal, the video game could not depict specific players playing for their teams. The Clemson quarterback, for example, could not be identified as DJ Uiagalelei.

The NCAA's proposal would not stop players from joining together for group licensing opportunities without the schools' involvement. But the association's desire to keep the brands of the athletes and schools separate will make it difficult for the players to capitalize on the return of the video game.

Gabe Feldman, director of Tulane's Sports Law Program, said players being compensated for the video game is more of a joint licensing problem than one of group licensing. A joint agreement between schools, players and EA Sports would be beneficial for everyone involved.

“The value of these games is their realism and getting to control the actual player,” Feldman said.

There are also plenty of unanswered questions about how group licensing would work with college players. With professional athletes, players’ unions negotiate group licensing deals for members. No such union or association currently exists for college athletes.

“The fundamental problem here is: How do you do it effectively? How does it work?” Swarbrick said. “How do you legally bind a group? They’re not employees.”

“What is the mechanism?” he added.

The NCAA was prepared to vote on NIL legislation in January, but that vote was put on hold after the Justice Department warned the association its new rules could violate antitrust law.

The NCAA is also hoping for help on NIL from Congress. There have been five bills introduced related to college sports and NIL compensation since December.

Numerous state-level bills are also in the pipeline, including one in Florida that has been signed into law and goes into effect July 1.

The NCAA wants a federal law to usurp the state laws and provide some protection for further legal challenges.

On that front, the Supreme Court is set to hear the NCAA's appeal of a ruling in a federal antitrust case.

Swarbrick said he is in favor of the NCAA waiting until the Supreme Court weighs in to pass its NIL legislation because the opportunity to take control of the issue has already been missed.

“We've got ourselves, as we frequently manage to do in college athletics, in sort of the worst possible position,” Swarbrick said.

By Jim Vertuno And Pat Eaton-Robb 36 minutes ago
By John Coon 11 hrs ago
By Pete Iacobelli 13 hrs ago
By Dave Campbell 18 hrs ago
By Anne M. Peterson 19 hrs ago