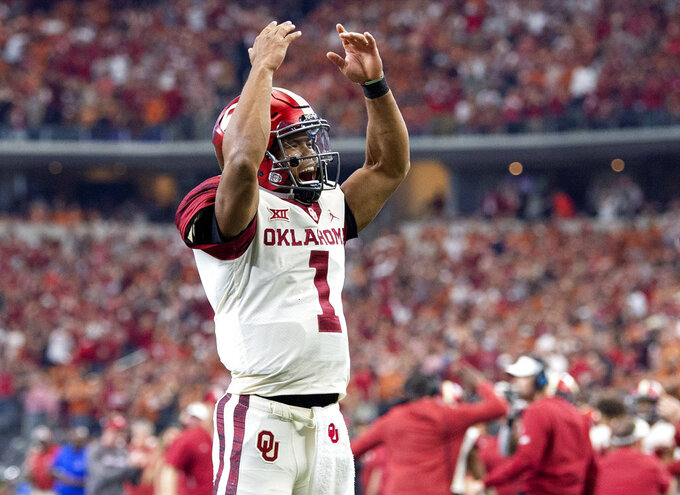 Oklahoma quarterback Kyler Murray (1) celebrates after throwing a touchdown pass to tight end Grant Calcaterra at the end of the first half of the Big 12 Conference championship NCAA college football game against Texas on Saturday, Dec. 1, 2018, in Arlington, Texas. (AP Photo/Jeffrey McWhorter)

Oklahoma: QB Kyler Murray has thrown for 4,053 yards and 40 touchdowns this season.

Alabama: QB Tua Tagovailoa has 37 touchdown passes and is No. 2 nationally in pass efficiency this season — behind only Oklahoma's Kyler Murray.

Oklahoma: The Sooners are in the playoff for the third time, and looking for their first win. They lost the Orange Bowl in 2015 and the Rose Bowl in 2018, both of those being semifinal games.

Alabama: The Crimson Tide are the only team who have appeared in all five editions of the playoff, and are seeking a fourth consecutive berth in the CFP championship game.