Oregon has 5 turnovers in Fiesta Bowl loss to Iowa State 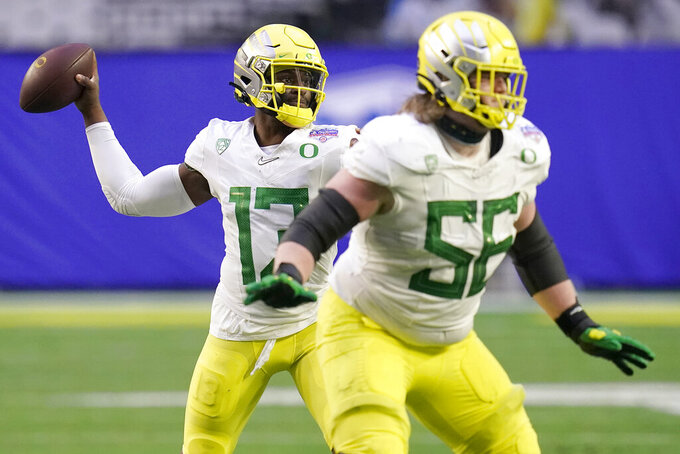 GLENDALE, Ariz. (AP) — The youngest team in the FBS, mistake-prone Oregon looked it in a 34-17 loss to No. 12 Iowa State in the Fiesta Bowl on Saturday.

The Ducks (4-3, CFP 25) committed a season-high five turnovers, including a muffed kickoff return, had a touchdown negated by a penalty and held the ball for only 17:12. They were 0 for 6 on third down.

“It is a game of execution,” coach Mario Cristobal said. “We weren’t able to execute and get done what we needed to get done.”

Iowa State (9-3, CFP 10) turned the first fumble into a field goal midway through the third quarter and blunted later drives after Anthony Brown fumbled and Tyler Shough threw an interception.

Oregon gave up 10 points on turnovers. It is usually on the other side of the turnover battle. The Ducks averaged 9.15 points per game off turnovers over the last two seasons, second in the FBS to Alabama,

The Ducks rotated Shough and Brown at quarterback, an orchestrated strategy that Cristobal said he believed gave the Ducks their best chance. Both threw two touchdown passes in a victory over Southern California in the Pac-12 title game.

Redshirt freshman Slough, one of 16 Oregon players who made their first career start in the regular season, completed 7 of 9 passes for 79 yards and an interception.

Senior transfer Brown entered early in the second quarter and played most of the rest of the game, completing 12 of 19 passes for 147 yards. He rushed for two touchdowns and lost a fumble.

“He (Brown) developed a hot hand, and we stayed with the hot hand,” Cristobal said. “That’s what transpired. Nothing else.”

Both are eligible to play next season because the NCAA granted every player another year of eligibility this season.

“It’s not up to me who plays,” Shough said. “I’m just trying to control what I can control and do my best.”

The bowl experience could be construed as a bonus for the young Ducks, who had the highest percentage of underclassmen (74%) in the FBS while winning their second Pac-12 title. Four Ducks, including top NFL offensive line prospect Penei Sewell, opted out of the season because of covid concerns.

The Ducks finished second in the Pac-12 North, but advanced to the Pac-12 title game because North winner Washington could not play because of covid issues.

Iowa State had the ball for 21 minutes, 29 seconds of the first half.

“It’s very frustrating to be on the offense side seeing them run out a full quarter,” wide receiver Mycah Pittman said. “The whole 2020 year was kind of up and down, It’s a year of very unfortunate things. At the end of the day, 2020 taught me a lot. Not everything is going to go your way.”

Oregon linebacker Isaac Slade-Matautia was ejected for targeting with 3:08 remaining in the first half when he struck quarterback Brock Purdy with his helmet as Purdy ran for a first down.

The first costly turnover came after After Iowa State took a 21-14 lead on Purdy’s run with 1:44 left in the half. Oregon’s DJ Johnson missed while attempting to make an over-the-shoulder catch of a short kickoff near his sideline and Iowa State recovered. Reece Hall scored on a 1-yard run 17 seconds later for a 28-14 edge.

Mykael Wright had punt bounce off the back of his helmet when he accidentally got too close to return man Josh Delgado and Iowa Stater recovered Connor Assalley’s first field goal to make it 31-17 with 6:30 remaining in the third quarter.

Cristobal said the loss “has to be used as fuel. (Iowa State) reminds a lot of the team we had last year, and how they found a way to execute and do the things that they need to when the game was on the line.”